A lot of people told me that I was an idiot. From their perspective, narrow minded as they were, they might have been right. But I knew what I was doing – I was born a salesman. The instant I entered this world I looked at my parents and knew: I could do better than this.

And I did. Only 3 months after I was delivered, I got an upgrade. A whole new set of parents who were better looking, lived in a fancier neighborhood and were richer and cleverer than everyone else! At least that’s what they thought. In truth, they weren’t really very clever. For years and years they put me into a center for simpletons and called it school. I was tested and brainwashed, indoctrinated and called names – as their son. But I played their game because it gave me discounted access to the cultural monument of knowledge inside our town hall: the library.

Everything I know today stems from the books inside that building. The white facade outside screamed for paint, the ornaments of stone wailed of a forgotten past and endless silence. From within this eerie tranquility I learned about Death. Now, I don’t mean ‘death’ as in absence of life or the state of being after stepping down from an unfulfilled existence. No, I mean Death with a capital D. The impersonated force of your last walk. The Grim Reaper himself.

Death became a popular figure as the centuries wore on, while mankind tried to find their place in the universe. From mythology, religion, literature and the news only one thing was clear, seeing Death is the end. Except when it comes to the TV show Supernatural. There it was more of a cliffhanger. So for the sake of argument, let’s just count them out (they were wrong about almost everything anyway).

The image of Death varied vastly depending on the time in history, the culture and religion. And although the Bible (like Supernatural) wasn’t a source for reliable information, they got one thing right. The source of Death’s power is the scythe. Like a farmer, Death ran around, slaying people’s souls out of their butts. Considering that Death is a couple of million years old (yes, religion is wrong about that as well) he is quite agile. How do I know this? I’ve seen it! During my research in the catacombs of dusty books that haven’t been touched in ages I found instructions to a ritual which would allow me to witness a reaping, making Death’s work visible to my human eye. Living close to a retirement home, I haven’t had to wait long. The old lady with a crook was no match for him. She was similar to how I have always pictured Death: an old man with a scythe running after people.

And so my business idea was born.

Imagine: The first caveman coming around, settling down in some more or less prosperous area. Small tribes of furry men and equally hairy women fighting with prehistoric monsters for the top of the food chain. A lot of cave dwellers died that way. The rest through malnutrition and lack of proper toothpaste. Back in the day, Death must have had an easy job picking up the litter of a few souls and chilling on the beach.

Compared to the amount of souls that walked the Earth all those millenia ago, our modern day must be hell for him. A single creature, although supernatural, has to travel the globe to reap over 160,000 people per day – with a scythe! A tool outdated for hundreds of years, nowadays displayed on the walls of museums and abandoned barns. With the world changing into the technological era and population rising into billions I knew my edge in the supernatural market: Death needed an upgrade. Begone the times of the Grim Reaper chasing after athletes and free-time joggers. Of elderlies racing in electrical scooters away from the inevitable. Mass suicides, terrorist attacks and pandemics were killing people faster, more often and more effectively than ever before. An advance in the technique of mass reaping and collecting souls, was long overdue. Even Death deserves a healthy work environment.

So I became an entrepreneur. Head of my own company. With only one product to sell and only one customer to satisfy.

After years of advertising, waiting and growing older, the first ever customer walked into my shop. A black robe faded by sun and torn by time. A face dark and gruesome. Hanging shoulders and a rounded back told the story of a tired man. In his left hand was a scythe with a long handle and broken blade.

“I’ve been waiting for you,” I said with a warm smile on my face.

A deep voice rang out of the hood. “Not many people are eager to see me.”

“Not many people have something to offer you,” I replied.

He looked up, his interest awoken. “And what has a mere human me to offer?”

“The reason, why you are here.” I grinned. This was my moment to sell: “You want your life back without losing your job. You love what you’re doing, but hate all the work it involves nowadays. Without the fun in reaping, everything seems black and white.” His silence was proof enough that I had not only his curiosity, but attention. I continued, “Humans are breeding and dying at an accelerated pace. The means of staying alive through medicine are refining by the day. I can’t imagine how many calls you get that by arrival they’re already out of the hospital and back to their old self-destructive selves. The old days of swaying on a battlefield are over. People nowadays die alone. At home, in clinics, out in the woods.

“All the travelling by foot must be exhausting. All the swinging back and forth must be draining. I have the solution to end your suffering.” I let the unspoken question of interest linger in the air between us. The moment of consideration and modesty of an ancient being lasted longer than any human could have suspended his craving to know what I had to offer. But he cracked. They all do in the end.

I spoke gently. I spoke softly. I already answered his ‘how’ and only needed to show him the ‘what’.
And since there was only one thing besides me and Death in my little shop outside of the town I grew up in, an outstretched arm was all that I needed.

“A farming combine?!” he shouted.

“A farming combine.” I answered affirmatively.

“A farming combine.” he repeated and started grinning. 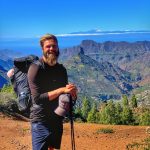 Dennis Vigas left the comfort zone of an ordinary life to become a full time hiker and explore the depths of life.