Empaths of the Eleas Continent

“So, you here for the burning then?”

“Oh no,” Rylin said, looking back at the Apothecary. “I was just passing through.”

“Well, it’ll be a big turnout. Got a real nasty one this time, want to hear?”

“I heard that she was in Ebon when they found her,” the Apothecary began, stirring the lavender concoction in her small cauldron as she spoke. The fumes from the incense, along with the strong smell of the lavender were almost overpowering for Rylin. How the apothecaries got used to it, she would never know.

“By the coast?” Rylin said without thinking. Ebon was atop the white cliffs – the same cliffs she’d heard Caelia mention from time to time.

“That’s right. She was a water type – brought the wrath of the sea upon that small village. They didn’t stand a chance.”

“She brought the sea level up the cliffs?” Rylin must’ve sounded as astonished as she felt because the apothecary grimly nodded.

It was, but Rylin knew her fear was far different. To hear what your kind was capable of was very different once you’d experienced the same thing yourself. She wondered how young the girl was, what her thoughts were at the time. To have abilities linked to emotions meant they had to maintain a delicate balance, and not all of them managed it. All it could take sometimes was one bad day.

“To think she came from here, from our Belsa,” the apothecary sighed. “May the goddess, Emerla, purge her soul. She must atone for her crimes.”

“The crime of ‘existing’ you mean,” Rylin said without missing a beat, but she instantly tensed up. “So, they should have never been born in the first place.”

The apothecary was silent and simply stared at her for an uncomfortable length of time. But, Rylin held the apothecary’s gaze with all the confidence she could muster.

She was calm and in control.

“Yes,” the apothecary said finally, returning to her cauldron of lavender oil in the making. “All of them are dangerous and wicked creatures. I mean, just look at the damage they cause. The lives they keep taking. Empress Mara is right – we won’t be safe until we’re free of them.” She paused her work to give Rylin a smile and a shrug. “It’s also as good an excuse as any to keep warm in this goddess awful weather.”

“I’ll think about it,” Rylin replied in a tight voice, averting her eyes.

“There,” the apothecary said, not a second later, “three small lavender oils. That’ll be 10 Rua’s.”

Rylin reached into the brown pouch at her waist and placed a bunch of hexagonal metal coins onto the counter before she quickly turned away.

“You’ve been to the Republic?” She heard the apothecary say.

The words made her tense. Slowly, she turned to see the woman gingerly pick up a pale blue coin with a look of intrigue in her eyes. It was ok – she just had to remain calm. Already though it felt like there were multiple eyes on her.

“Lucky, being able to travel like that. And for someone so young…”

“Yeah, yeah I get that a lot. Thanks.” Rylin tried to smile as she grabbed the vials from the counter and then she ran. No longer did she care what the apothecary thought – she was probably greedily scooping up the money she had left anyway – it was too far into the night to be concerned with that. She had to leave now.

The rumble of the drums gave her pause, sending a chill down her spine. No. No, it couldn’t be. She was so close to leaving. But, it was – all the people around her suddenly turned at once, obeying the sound of the drum, and she was the only one not moving.

She saw them amongst the crowd, the knights, herding the people towards the town square like cattle. She was trapped – she had to move, or she’d be caught. For the first time since she’d started this routine, Rylin was afraid. It’d never come to this – she’d never been trapped, unable to escape the impending execution before now. She could feel the panic starting to rise inside her, like water being brought to the boil. But, she forcibly turned on her heel and followed the masses, willing herself to relax.

Remaining calm was her only option now.

Carefully, she put the vials of lavender oil away and kept an iron grip on her hood, thankful for the bitterly cold weather. Glancing up at the sky, she saw it had changed to an expanse of inky blackness with a scattering of stars not bright enough to drive away the darkness around her. The brightest source of light came instead from the torches lit especially for the Burning. One flickered on the wall behind the golden lion – the execution device for Water Empaths, and the proud symbol of the Leorian Empire. The gold animal-shaped cage was on top of a stone platform above the people, and a knight was holding a torch beside it. The executioner awaiting the lion’s victim.

One glance around the crowd was enough to tell Rylin that the Empress’s knights were everywhere; a group were on guard around the stone pillar supporting the platform, and there were many at the edges of the crowd too. All of them were holding spears. That was different. They’d never actually caged people in like this before now, so why the sudden change? Was it in retaliation for the Empaths they had saved?

“No-one is allowed to leave the square till the execution is over.” Rylin heard someone, a man, speak from behind her. Probably another knight. She turned to look and, sure enough, it was another one speaking to a mother and her child; the child tugged insistently on their mother’s hand, looking away from the crowd.

Rylin turned away as the mother knelt in front of her child, seeing an expression of fear cross her face. That reaction wasn’t anything new. The whole execution was extreme, but that’s how the Empress liked it.

Fear kept people under her control. 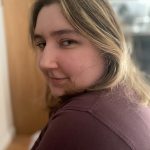 Rebeca Elgueta is a recent MA Creative Writing graduate from MMU in Manchester who first got into creative writing through a club in college. Her favourite genre is fantasy and she’s a big Marvel & DC comics fan. She also enjoys visiting art galleries, the opera, listening to music, playing hidden object puzzle adventures on my laptop and reading on her kindle.