His watch suddenly flashed blue. He already knew what it meant- he’d been doing this for years. James ran out of his office abruptly and no one questioned him- they learnt with time that this was his normal behaviour. James ignored the passing whispers of new workers and interns- with time they’d get used to it as everyone eventually did. Running to his car, he opened the door and sped home. He had to be fast- someone needed his help. His disappearing act had lost him many jobs before, but luckily this job understood. Or at least they pretended to.

Stopping in front of his house, James quickly parked the car and ran inside. He grabbed a book off of the nightstand and flipped the pages to where the bookmark laid. It was flashing the same blue as his watch. A sigh of relief escaped him- he wasn’t late. As he grabbed the bookmark, he felt the world around him swiftly shift as he left his present and teleported to a time unknown.

Losing his balance, he staggered to the ground. Quickly taking in his surroundings, he realized that he stood in Times Square which was busy, as normal. Unfortunately he wasn’t here to explore and have fun- he had a job to do. James looked up at the giant display clock where the date read “September 11, 2001, 8:00 AM”. A pang of dread ran through his body as he checked his watch which was no longer glowing. He had two hours to help whoever he could before he needed to grab the bookmark hidden in this timeline and transport back home. The timer on his watch started ticking and he began running. He had to reach the towers before they came down- he had to get as many people out as he could.

Would anyone listen to him? Would they get out in time? Would he be able to save lives? Would he lose his own? Questions and fears ran through James’ mind as he dashed toward the two towers. Where should he start? Would he have to venture up each floor? Would he have enough time before the plane hit?

The twin towers stood ominously before him. He double checked his watch- he had until 8:46. That was when the first plane would hit. James inhaled a shaky breath as he walked into the south tower. His first instinct was to talk to a security guard. “Excuse me, sir,” James exhaled, “I’ve received information that these two towers are under attack. By 8:46 a plane is going to crash into this tower and kill thousands of people.”

“Pft, yeah and I’m the President of the United States,” the security guard mocked his warning, “Get lost.”

“Sir, you must make an announcement,” James pressed on, “We have to get as many people out as possible!” James felt his time quickly ticking away. The security guard wouldn’t believe him. James couldn’t blame him- if he was in the guard’s position he probably wouldn’t believe himself either.

“What is this for? A play audition? A charity fundraiser?” the guard asked mockingly, “If I give you cash will you leave me alone?”

“Let me use your speaker system,” James said forcefully, “That’s all I ask.”

“Hate to break it to you,” the guard retorted, “but anyone who hears your announcement won’t listen to you. If it means you stop bothering me, then be my guest.”

James took his chance. He looked at the clock in worry. He didn’t have much time. He urgently spoke, “There is a plane heading towards this tower as we speak, and it’s on course to crash into this building in just ten minutes. You must get out immediately. Heed my warning or you may not live to see another day.”

Some people began trickling towards the exit, but there weren’t many. They didn’t believe him. The minutes flew by faster and James knew he had to get out before the plane came. “Well goodbye sir,” James addressed the guard as he exited, “Chaos is imminent, and if you want to avoid it, get out now.”

James left the tower and watched in horror as moments later the guard ran out and, seconds after, the plane hit the tower.

“Dear God,” the security guard squeaked in horror as the plane crashed into the tower. A huge explosion echoed through the streets as debris fell from the building. The tower was engulfed in flames and smoke filled the air. The guard turned to him once more, “How did you know?” He croaked out, “You had the time down to the last minute, how is that possible? Why weren’t you more forceful?”

“I tried, sir, but you yourself didn’t believe me,” James said, “I tried my hardest, but maybe now you can help me. A second plane is going to hit the north tower at 9:03. We only have 25 minutes, even less, to evacuate the building.”

The guard looked at James quizzically, but decided not to question the man, especially since there were lives on the line. They headed into the second tower and the guard called out to his colleague, “Frank, a plane just hit the first tower, and according to this man over here a second plane is going to hit this tower soon! You’ve got to evacuate the building immediately!”

Frank looked at his friend with a sense of urgency, “Did you say a plane crashed into one of the towers, and another one is coming?”

“Yes sir,” James shouted, “We must evacuate everyone before 9:03 when the second plane will hit.”

“Alright, but it’s bonkers to believe,” Frank said “I doubt anyone will really leave.” Turning on the speaker system, he urgently addressed the building’s occupants, “We are heavily advising everyone to evacuate the building immediately. The south tower was hit and it is believed that another plane is coming here. Please evacuate calmly and quickly for your own safety.”

A couple of people left the building, most likely out of curiosity. Worry was plastered on their faces. If a plane really hit the World Trade Center, they wanted to get out and move as far away as possible from here.

James checked the time, “We’ve got to get out!”

“What about everyone else?” the guard from the south tower asked, “We can’t just leave them!”

“We’ve got no choice,” James croaked. The sound of a roaring engine grew louder. There was a huge explosion. Debris and glass began falling down. The plane hit the tower while they were still inside. “We’ve gotta get out now, unless you want to die today!”

The three hurried out of the main entrance, which was thankfully still standing. When they stepped outside, the smoke emitting from the wreckage clouded their vision and lungs. James checked his watch which was now glowing blue. He didn’t have much more time in this place; the bookmark and his ticket home was hidden somewhere in this timeline. He had to find it before the timer on his watch ran out, or else he’d be trapped in the past.

The three helped as many people get out of the burning and smoking tower as they could. Firemen, police, and first responders rushed onto the scene. A few bystanders looked on in shock and panic. Paper, glass, debris and bricks fell from the tower, causing chaos on the streets. James checked his watch; he only had a few minutes left. Distress coursed through his veins, “What time is it?”

“It’s kinda creepy how you know exactly what’s going to happen before it does,” the guard trembled, “but you were never wrong about the planes or their timings, so let’s get out of here!”

They ran, high on adrenaline, as the tower came crashing down behind them. The sound was deafening. Glass shattered. Debris fell at an alarming rate. Smoke filled the streets like a tidal wave. Yet through it all, James was only focused on the bright blue glow of the bookmark as it flew out of the tower and into the air. He chased after it at full speed, the timer hurriedly ticking towards the end. His watch began to dim and along with it the bookmark. James leaped up into the air. Before his hands could grasp the paper, the light went out. His feet smashed into the ground as he gazed, horrifyingly, upon the now average looking bookmark in his hand. He was too late. He had failed. He was stuck in the past. 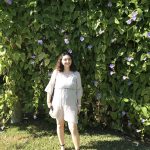 About: Frieda Sutton, 19 years old is a writer and aspiring author in hopes of inspiring others and making them smile.

Photo by Icons 8Team on Unsplash