Jared Dunning felt as if his reflection was judging him. It watched him as he brushed his teeth and washed his face, refusing to loosen its stare. Its wide, baggy eyes reminded him of his lack of sleep, of hours spent doing nothing but staring into space as his fingers scrolled mindlessly through his phone. His reflection was slightly bulkier than he imagined himself being, and its messy brown hair stood straight up, touching the top of the mirror’s frame. Jared combed his hair to the side, threw a plain hoodie over his white t-shirt, and pulled some navy-blue jeans over his gray boxer briefs. His reflection followed him downstairs and into the kitchen, looking at him in the toaster and through the microwave door.

In the back of the bus, his reflection greeted him again, peering back at him through the blackness of his phone. He had left his charger at home, so each time he stretched his phone out of his pocket, expecting a shot of dopamine and an escape into an idealized world, he was instead met by his own sad eyes.

Jared was a sophomore in high school, and nothing about that fact brought him much excitement. He knew his way around his school and went through the motions of his classes just like he would any other year. He had no parties to attend and convinced himself that he was probably better off not participating in the politics of cafeteria royalty. In fact, why engage with others at all?

However, deprived of a cell-phone to hide himself in, Jared found himself pursuing something he generally despised. He was startled to hear himself say “good morning” back to Kimberly Jackson, the annoying kid whose locker was next to his.

Having already welcomed conversation, he had no way out.

“How are you?” they asked, and Jared wondered if every question was going to be this hard.

He picked up his KTD from his locker and stuffed it into his pants pocket next to his deceased phone. But as he turned away and started in the direction towards class, Kimberly was still standing there in their black ACE shirt. They were flicking an orange lanyard around their finger, waiting patiently for Jared to continue the conversation.

Jared already disliked the kind of people who casually flaunted their lanyards. He thought to himself that they were only trying to show off that they could drive. With each rotation, a glimmer of light reflected off of the bottom of it, blinding him.

He rubbed his eyes then looked up, meeting Kimberly’s gaze.

“I’m good! You know, we both have physics first period – why don’t we walk together?”

Jared was not interested, nor did he have any idea that Kimberly was in his physics class.

“Yeah,” Jared responded, dashing to class before the conversation went any further. Kimberly stayed back, pretending to go on their phone before awkwardly trailing behind him in the same direction.

Jared sat down in the back of the classroom, where he spent most of his time sketching caricatures of Mr. Jefferson and his big bald head. When he realized that the class was being divided into pairs for group projects, he had no idea how much time had passed.

Of course, by nothing short of luck, Jared and Kimberly were paired together. He asked Kimberly what topic the class was even discussing, and immediately, he was frustrated with the first words out of their mouth: an enthusiastic announcement that their project was to be on time travel.

It reminded him of his mom. Two years ago, she was one of the first to disappear. Before the incident, she used to show Jared her time travel wristband. She told him of how she would witness a crime, record it, and then press a well-hidden button that would send her back in time to before the event. Like a superhero, she’d lock up the accused with full proof of the criminal offense they were about to commit and no harm ever to be done. It was entirely mesmerizing. Every part about her job intrigued him, but it was that wristband that made it all work. That slab of material she wore broke through time, and in a way, it was a part of her. Like her, however, the wristband was also a part of a memory he tried to keep tucked away.

This is a scientific project, he told himself. There is no reason to connect it to anything personal.

“What I have trouble understanding is how one can travel back in time and risk the fact that their actions may in some way lead to themselves never being born,” Kimberly said to kick off some sort of conversation.

“You mean the grandfather paradox?” Jared asked with a slight smirk while continuing to doodle.

When he tilted his head up, he realized Kimberly was doing that weird thing again, where they stared at Jared in silence until he said more. “Well, it’s never been entirely solved really.”

Their eyes bugged as if to say “go on!”

Grudgingly, he kept speaking. “It’s still a large philosophical and scientific phenomenon. Anyways, in modern times, it’s very rare to find a device that would allow you to travel more than twenty-four hours into the past. I believe there are instances of early time travelers going back to ancient times to experiment with the capabilities of it. But that was done for a short period of time, and they didn’t do much other than observe. So it’s difficult today to know exactly what would happen if someone changed history on a scale as large as multiple generations of travel.”

“You know, you actually seem to know more about this topic than I expected you would.”

To find out what happens next in this story, search The Shadow Shifters on barnesandnoble.com! 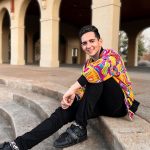 Jordan Spector is a student at Washington University in St. Louis in the graduating class of 2025, currently pursuing a double major in Communication Design and English. He has been creating art and telling stories ever since he was in elementary school, and by the time he got to high school, his work and focus turned to political activism. In his junior year of high school, Jordan was awarded a Scholastic National Gold Medal and Silver Medal for two oil paintings addressing gun violence in schools. He is the author of The Shadow Shifters novel and the current Layout Editor for his school’s Spires Literary Magazine, where he has found a passion in creating and formatting stories which inspire young people like himself to lead and generate change. You can follow him on instagram @jordan_spector!

Featured Image by rayul on Unsplash