For centuries, the art of macrame has entertained, dazzled, and united people from all over the world with its intricate designs and infinite potential of uses. From friendship bracelets to handbags, this weaving skill is a cherished talent that is believed to have originated in Western Asia, and then spread through Europe – becoming a popular pastime in the English court of Queen Mary II in the 17th century – before making its way all over the world through merchant ships.

The word macrame’ is Spanish and is derived from the Arabic migramah which is believed to mean ‘striped towel’, ‘ornamental fringe’, or ‘embroidered veil’. It has also been given other names such as ‘square knotting’ after a popular knot used by 19th century British and American soldiers who used the art to make hammocks and belts, and ‘McNamara’s lace’ among sailors.

The first recorded art of macrame’ is from 13th century Arab weavers who used the special knots to add a decorative finish to hand-loomed fabrics used to make veils, shawls and towels. It continued as a form of lacemaking. Already a functional talent for sailors making fishing nets, they used the rising popularity to trade and sell their macrame’ creations, thus spreading the art to countries such as China and the newly-discovered America. In each country it landed in it became highly popular, however it reached its peak of popularity in Victorian England where it was used on ladies’ shawls and veils to tie off excess lace wool and fabric. It was also used for tablecloths, curtains, and bedspreads.

After the Victorian era ended, it fell out of fashion, only to be picked back up in the 1970’s where it was used on clothes, bags and other house furnishings; but it soon fell out of fashion again. Recently however, macrame’ has become popular, now in the form of jewellery such as necklaces and bracelets, often knotted around gemstones and seashells.

Due to it being firmer than wire or chain bracelets, macrame’ weaving has become a popular technique for friendship bracelets as they are less likely to break and can be worn comfortably without taking them off. I chose to start this hobby after seeing a few YouTube videos and deciding it would be a fun pastime to keep my hands busy. However, I then realised it was easy and after getting fairly good I began to sell them to raise money for a charity in Sierra Leone. I continued making simple macrame’ bracelets in different colour patterns to take with me to Sierra Leone and gave them to the children in the orphanage we were staying at. I now make them in more complicated patterns to give away as presents.

Small businesses can become quite successful selling macrame’ bracelets, especially on websites such as Etsy. Macrame’ bracelets are also incredibly popular souvenirs for tourists, and they make thoughtful and loved gifts for friends and family.

Although you can use any kind of wool, string or thread to do macrame’, I use embroidery thread that I get incredibly cheaply from charity shops, craft stores such as hobby craft, and table-top sales. Tutorials on how to make them can be found all over YouTube and I find macrame’ patterns on Pinterest that are simple and easy to follow. 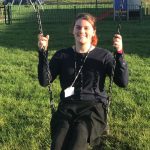 Esther Green is a British Sixth Form student and the Magazine Editor for a small, historical, Christian charity organisation called the Sierra Leone Mission. Her passions are history and textiles!

Photo by mohsen ameri on Unsplash