the moon rises like carp from between the trees, slow-shining. eight paces away, in the clearing, the abandoned water reservoir juts up through the treetops, already sodden with moonlight. vines crawl across its cracked gray face, bathing in the pale glow. icicles of rust drip from the barbed wire gate that rings its entrance.

there are grooves there, in the oak-panelled stairs that spiral up to the reservoir’s gated roof; as i climb it now i can hear the thundering of our converse, our loafers, the slick-soled boots Leana wore on the first night we hoisted each other up over the gate and onto the expanse of broken Corona bottles and lovestruck graffiti and abandoned pizza boxes ashen from rain. years of our laughter bubble up from the concrete like the froth of faraway rivers: the hushed murmurs of our first perseid shower, the whisperings of our tea lights, the tiny clicks of our polaroid cameras—all blending into the same sustained note, plateauing, until my flashlight slices white through the darkness and illuminates nothing.

I think we ought

to get away from here.

There are only so many summers we can spend

drinking love with our hands,

watching it trickle between our fingers

until our lips touch

reeds break through my bikini line

I prick holes in my cheeks

witchcraft is supposed to be soft

and a bit selfish,

she wants out of the coven,

I replace her words

from between her teeth

until she coughs petals.

I had another lucid dream last night, and in it

I’m telling myself that I’m sliding the bullet

back into the mouth of the gun like a tongue

I’m telling myself this is an ending of sorts; maybe the best kind

of ending I could have asked for, really,

what with the sun slipping through the oak leaves

like something forgotten. what with his feet bare in the dirt, spraying soil.

what with the slow turn of his head, the fringe of his bangs falling into his eyes,

before they rot and fall to the ground.

I’m telling myself this is a reel of film

on the cutting room floor, that this is the scene of him saying tag, you’re it

through his blue polo shirt. that this is me counting to ten,

the gun’s smoke curling back

into its own mouth. that it’s the director’s cut, that it’s his blood unstaining the cotton

of his shirt, that it’s his laughter ringing through the pines 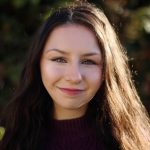 Emma Sloan is a published poet, journalist, and flash fiction writer. With an educational background in Writing and Publishing from the University of Victoria, Emma now runs her own copywriting and editing service, The Wee Writer. Her works have been featured in publications such as The Huffington Post, Sonder Midwest, and The Good Men Project. Follow her on Instagram at @emmacsloan for updates and news.

Featured Image by Boxed Water Is Better on Unsplash