I find myself listening to another emotionally eviscerating ballad, but no pianos were used in the emotional undoing prompted by this song. A stripped track with virtually no added production than an acoustic guitar, subtle string accompaniment, untouched vocals, and white noise apparently was not enough warning as to hint at the raw emotion that the song was about to convey.

Before I even dare traipse into the lyrics, let’s take a moment to talk vocals. There is a faint echoing sound to the vocals despite Olivia’s voice sounding so clear and resonant. Whether it be a specific microphone or the killer acoustics of the room in which she recorded, Olivia sounds as if she is that distant inner voice that is pleading with the listeners between their own two ears.

The opening verse already calls to most, if not all, pre-teen/adolescent girls who sought out external validation in their lives through one mode or another of changing themselves. Makeup, personality, interests, comparison–they all do the trick.

That is…until they don’t.

The use of the similar audio vacuum from driver’s license delves the listener a level deeper into the dark abyss where we often lose sight of what is most important in life–who we truly are. Now, I can sit here and paint a beautiful picture of the masterpiece that Miss Rodrigo composed for us all, but the real scenario that played out when happening upon this song was a bare-faced, sweats-adorned girl lying in the fetal position sobbing until her eyes burned, feeling this ache in her chest that she did not know whether it was deep-seated or ran straight through her.

“I knew from the start this is exactly how you’d leave,” MA’AM.

At first-play, I had just gotten out of a relationship that mirrored the narrative a bit too eerily. The relationship ended and my ex-boyfriend began dating an old friend (blonde, beautiful, and “exciting”) about whom I had always been insecure, and silently worried that he would leave me for her.

It breaks my heart even now to hear the first chorus during which the vocals sway between a beautifully mixed belt to a delicate falsetto and break into a weak speak-singing tone. The power that hides beneath becomes overshadowed by doubt and pain. Much like the result of some painful breakups. And for this Leo girl, it delved into deeper wounds that only time (and some long-overdue therapy) could unpack.

FUCK ME UP WITH THOSE FOLLOWING LYRICS. “I don’t want your sympathy, I just want myself back.”

Bruh. Who on earth gave her the right to do that? Oh yeah, she absolutely gave herself the permission to speak so rawly about a time when she lost herself. Hearing those lyrics was like a message from the universe telling me I was not alone in my pain. No one is. Right as you have time to emotionally come to that same conclusion, the power in Olivia’s vocals strengthens as she almost spits out “true” before building into the best bridge I have ever heard in my life. And yes, that is a hill I am willing to die on. Not even buried six feet under, proudly on top of the hill.

Back to the bridge, the lyrics are almost vengeful as Olivia no longer pleads and mourns the loss of herself, and pities the changes she had made in exchange for what she thought of as love. Her voice shakes and yet is somehow steadfast as she slides down a beautifully subtle vocal run determining that she deserved better than feeling “used,” “discarded,” and like “[she] deserved nothing.”

The stages of grief evolve over the course of the tune as she delves into a line of hostility toward a past love that their pity is not needed for her but rather to be given to themselves. She takes a moment of silence (in the live performance YouTube video) to collect herself before bravely hitting a high falsetto without breaking or shaking. With a tone of resolve, she reaches acceptance of her being enough for herself and a future love.

The kicker? She goes as far to note that the insecurities she internalized and the claims of being unsatisfied were projections from the former significant other. Now, do I think that it was completely on the other person’s projections to manifest such a deeply-rooted stray from the self? Mmmm, no. However, do I also root for anyone feeling the way Olivia and I did, attempting to dig themselves out of the trenches of a false persona to step into their light? With unshakeable confidence, YES.

To think that the version of myself writing this was preceded by a seemingly-unbearable pit of self-loathing, destructive thoughts and tendencies, and LOTS of wallowing in bed is actually remarkable. And what other album would accompany this sad girl hour™️ era of mine, but none other than SOUR by Olivia Rodrigo.

Please do not get it twisted, I still think Olivia is one of the most talented songwriters of this generation along with being absolutely stunning, but I used to be absolutely FLOORED by any compliments paid to me that resembled, “You know, you kind of look like Olivia Rodrigo,” simply because I could not fathom how I even compared.

Mind you, I am in my twenties (realistically looking about 15-16) and I had been buried under layers of fake bravado and prowess only to reveal a scared, insecure little girl just wondering if I would ever be enough. Enough of what exactly? You name it: funny, smart, creative, pretty, real, chill, outgoing, independent…the list goes on and on. And for about a decade, no compliment, no words of encouragement, no boyfriend, friend, status, or even music had reached me in such a way as enough for you did–not even the empowering anthem of What Makes You Beautiful by 1D (cue SHOCK & AWE).

Now that I am in a better headspace, I thought I would travel down Memory Lane to revisit the song that my inner wounded child had on repeat for months before I got the message: As I lost myself in this song, nearly a year later from dwelling on all the bad shit in my personal view of myself and the world, I smile and hug the part of me that felt seen by Olivia’s gut-wrenching breakup song. She got me to listen to my pain and sit in it in a way that nothing else could.

Losing myself was simultaneously the best and worst experience of my life. As it turns out, as deeply as I feel pain and loss and hopelessness, I can also feel love, joy, and peace to the same extent. The point of the matter, though, lies in the fact that in losing myself, I also found myself and that being me and loving me, for the good and the ugly, is just enough. 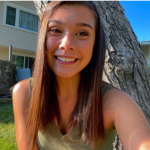