When the reporters and show hosts and fans asked, Dianna didn’t answer questions about her slit wrist. The thing was, she never even tried to hide it. It was there, like a fact she never acknowledged. I thought she’d at least have tattooed over it or something, or worn bracelets to hide it, but she never did. If anyone did ask, she gave a cryptic answer: “It’s a reminder,” she’d say, and leave it at that. She was unknowable.

I tried to connect the Dianna I had known with the Dianna who had given herself that scar years ago. But the scenario I imagined—her standing in front of a mirror and swiping the blade up and down her wrist, hysterical, tears streaming down her face, before realizing her mistake and crying even harder as she tried to staunch the flow and call 911—just didn’t mesh.

No—that wouldn’t have happened. Dianna might have contemplated doing it in the bathtub (it would be sickeningly artistic), but then she’d decide against it. She might actually die in the bathtub—in the hot water, with nothing but rising steam and a blade—no, that wasn’t the intent of this cut. The Dianna I knew, the one I was currently trying to imagine in a bathroom armed with a blade to hurt herself with, wouldn’t be doing it to kill herself. Just to scare herself into continuing to live. She needed a taste of death, of what she was capable of doing to herself in order to make the decision to keep going.

So, Dianna stands in front of the mirror with a blade and an old t-shirt and a small bottle of vodka. Maybe she is crying, but she probably isn’t. There is a task to complete. She already knows how to do this task. She has researched how deep and how wide to make the cut in order to not run any serious risk. She has researched how to tend to the wound. and staunch the flow. And just in case, she has researched how to stitch it up. She stands there and tries to think. She is not thinking very clearly—she has waited for a time where all she feels through the emptiness is a blind focus. If she was having a good day, she would never attempt the cut. If she was having a bad day, she wouldn’t attempt the cut either—for the fear she would run the risk of letting it bleed out—or of swiping the other wrist.

She stands and she thinks and she lifts the razor and then puts it down. She thinks a while about leaving the bathroom, but the thought of returning to bed not having done anything except stagnate in front of the mirror makes her feel worse. She cannot go to bed without completing her task. She cannot see tomorrow without completing this task. It will never be tomorrow until she makes the cut.

Eventually, in a rising moment of gumption, she will swipe her wrist in one fast stroke. The cut is deep enough. Blood gushes across her hand, into the sink, onto the floor, blooming shockingly against the white tile and linoleum. She stares for a split second, stunned, before taking action. She presses the t-shirt to her wrist, pushes hard, and begins to count. The higher her numbers go, the worse she feels. The trance is over. She is alone in a bathroom with nothing but her blood and a growing nausea. She is shaking and on the verge of a panic attack now. What a terrible idea this was, just a terrible, terrible idea, and now she’ll have an awful scar to always remember this moment, this sight: a white bathroom covered in blood, a small blade looking like a murder weapon, an idiot girl.

She closes her eyes and tries to calm down long enough to take care of her cut. She counts to 100 and then counts again. She contemplates calling 911, but she knows if she lets people find her like this, she will not get better and the cut will have been in vain. She counts one more time.

She removes the t-shirt and the flow has stopped. She pours a little vodka on the cut and nearly screams. She neatly bandages her wrist and sits down on the floor and, at last, she cries. She cries quietly for a very long time. She has some water and some chocolate and then she cleans the bathroom as meticulously as she can and goes to bed. She doesn’t sleep, just in case.

I wondered then if she had stood in front of that mirror, blade in hand, and thought about how unfair it all was, that she should have ended up that way. But I remembered what she had told me herself when I last spoke to her all those years ago—life isn’t meant to be fair. 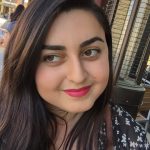 Georgie Jacklyn is a writer and aspiring filmmaker.