Immediate stabbing pain in my chest.

Flashback of how stupid—beautiful—but stupid and clueless, he had looked when I stepped inside the room.

He made one last thrusting movement into her before realising I was there.

“Emily!” He screamed almost accusingly, as if I had violated their privacy. He remained nude and perched behind her during the whole conversation

“Parker? What the fuck?”

“Why aren’t you at school…”

“Who’s that?” I said, gesturing toward the girl who was still bent forward, now covering her eyes. I threw my arms in the direction of the girl and she looked up, staring back at me with an expression just as clueless as Parker’s. It looked like she was about to answer the question. Her cheeks were still flushed red. He was still behind her.

I slammed the door. He called after me.

My shoelace untied itself and soaked up dirty water from the gravel driveway. Rain poured down on me and drenched my puffer jacket completely. It felt as though a soaking wet blanket was trying to pin me to the ground. I turned right and went down a narrow road, fields of grass on both sides. A bus roared passed me. Some kid inside pointed at me, showing his mom the big, wet fucking disaster that was walking next to the ditch.

Big oaks were lined up on both sides of the road, which was steeply inclined, like a stairway to nothing. Heavy drops of water were dripping from the trees. A loud, roaring thunder moved through the sky.

I better get away from the trees.

I once read that a girl got fried by standing underneath a tree that caught fire after being struck by lightning.

That was not gonna be me.

I’d already had my portion of misfortune for the day. I jumped over a small river of rain water that had formed in the ditch and entered the field. My shoes soaked up brown water right above the sole. The dirt was wet and sticky. I slowly sank with every step. Then something strange happened. The entire world went. Something snapped at my feet, a cold, hard sting moved up inside my entire body, splits me in two. My body was held by electricity. I smelled burnt bread. Nothing was wet anymore. Nothing was anything anymore. I fell.

Someone touched my left eyelid and pulled it open.

A person came into view. Behind them was the devilish grey sky. A woman was holding my eye open for me as though I had lost my ability to control my eyelids.

The woman was yelling at me like a military general. She slapped my thighs and some sensation returned to them. My toes felt like they were sprouting and growing anew from my feet. They wiggled inside my sneakers. The woman beat my shoulders and slapped my forehead.

My eyes closed by themselves, but I still followed her command. As I stood up the woman became increasingly smaller and smaller. Her voice was far below me, “Haven’t you lost your mind yet? We’d better hurry up then.”

I noticed the air had a smell of gasoline and there was the sound of a motor running. But I couldn’t see anything. The old woman took me by the hand and dragged me along.

“Jump!” she ordered and I jumped. A low flapping filled the air, similar to a bird flying. The woman had landed further away. Hooves clacked on the asphalt as she walked.

She squashed me inside some sort of side-car which must have been attached to a motorcycle. I wiggled down to reach the tiny seat. She started to laugh.

“Never small enough, ne-VER!” The motorcycle whined and took off. I grabbed onto a helmet in front of me but it left my hand and disappeared behind us.

“So tell me young woman: what or who got you here?” Her voice was strong and clearly used a lot.

“I, I got struck by lightning.” I answered.

“Aww, no? Really?” She screamed ironically. “They all think the same. All! Lightning, drowning, broken neck,” she muttered to herself. “But what hurts?” she asked and I understood what she meant. Parker. Parker cheating on me, hurt.

“My boyfriend cheated on me.” Tears streamed from my eyes and the Sahara desert that was my cheeks became a muddy field.

“WRONG!” she yelled and laughed, “Your past chose to become your past.”

“What?” I said, my tears still running. She laughed even more hysterically. She sped up and the wind pushed against my face, catching in my hair. I lost my breath for a moment.

I was about to answer “I do” but refrained. “Who are you? Where are we going?”

“To the child of the past and the present, darling. Your best enemy.”

My neck snapped as she suddenly sped up. My head fell and detached from my spine. My skull hung from the skin around my neck. As my head dangled there on the back of the side-car, my eyelids fell down and I could see everything. EVERYTHING! A rush of anxiety flushed through me. We had driven off a cliff and underneath us was a Grand Canyon-looking landscape. Small bubbles in every color flew from the canyons up towards us.

My head swung to the right and a blue bubble hit my eye. It stung like soap water. A child ran towards me in a green garden. She pulled the trigger of her water gun and the water hit my hair. The sight disappeared.

The old woman turned left and my head swung with it. I could see her back now. She had goat hinds for legs and hooves instead of feet. Right under her grey bun of hair were two small, red wings.

A purple bubble struck my left eye. A wedding on a beach at sundown: me with a man. A handsome man with strong hands. He was caressing my fingers with his thumb. There was generosity in his eyes.

It all disappeared. The Grand Canyon grew beneath us. Two more bubbles came at me with enormous speed. First one hit, a rainbow flickered in the sunlight.

The second bubble hit my other eye and the sight changed. The chair beneath me squeaked. My friends were singing ‘Happy birthday’, carrying me around a dark room. Music was playing, the room lit up with the flames of 25 candles on a birthday cake. They carried me out to the terrace in front of a beautiful house and threw me in the pool. The cold water surrounded and replenished me. It was a rare moment of stillness at a party like this. I pushed myself to the surface. As I got up from the water I laughed so heavily, so full of joy. Everybody was standing around the pool, dancing and singing.

I returned to the side-car and the wonderful sights disappeared. The bubbles were gone. My head was still dangling dangerously close to the wheels. The woman had let go of the motorcycle handles and held up both her hands.

“You feel.” Her fingers were touching, forming a peak. Then she moved one hand down and a bit out. “You see.” She moved her other hand in the opposite direction. “You are.” She brought her fingers close together again and completed the triangle. The old woman looked at me. Small strands of hair were brushing against her ears and cheekbones. “Love,” she said and we landed abruptly onto the asphalt again. She looked away.

“Goodbye.” I said and the side-cars small door opened by itself. I rolled out. She drove on. The hard ground tore my skin. The rain was still pouring, thunder rumbled in the distance, yet everything seemed different. I could feel the pain. I could see the blood slowly emerging from my wounds. I knew then that I am love. 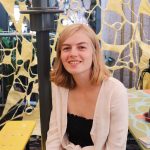 Julie Kølle is a young author, poet and filmmaker, currently living in Berlin. She’s originally from Denmark, Copenhagen. The obsession of telling stories sprung from listening to the tales her Finnish grandmother would tell her about the cold and mysterious country as a child. She once encouraged Julie to write a few words next to her drawings and the writing never stopped since.