“Oh! Ooohhh!” Zatana’s eyes darted between the two lovers with a devilish grin before landing on Alec. “You didn’t tell her? You didn’t tell the love of your pathetic, never-ending life that you are the one thing she despises so deeply. That you are the thing in the shadows that she’s been hunting.”

Nyx always knew that there was going to be one moment in her life where she wasn’t going to be able to glue her heart back together. Throughout her life, fissures, fractures, and ruptures claimed her heart. Every night, she cried to herself, hoping that one day it wouldn’t be that hard. One day she would be loved naturally and all consuming, allowing the fractures to fill in and heal.

Is this going to be the rest of my life?

In all those moments, she thought she hit the dark soulless pits of hell, but in this moment, she knew this was it. Nothing could compare to the feeling in her chest. A nothingness. Empty. Hollow. Destroyed.

How many times can a heart be broken before it is impossible to fix?

Nyx felt the bile linger on the back of her tongue. Moisture disappeared from her throat, leaving her suddenly dry. Her chest tightened, and she could feel the water pooling in her eyes.

I just want to feel okay.

Zatana strolled slowly over to Nyx, eyes narrowed as if she was stalking her prey. There Nyx knelt, one hand over her heart, one hand on the dirty ground of the ruins of the old church, completating the fate those stupid fucking stars gave her. She placed both hands on the ground, hoping, praying to anyone that would listen, to give her her magic back. But nothing. With the moon still hanging brightly in the sky, she was outnumbered by two Deities that still had their strength and what did she have? Nothing. No magic. No one to save her.

Zatana crouched down to look at Nyx more closely. “Look, I think you broke her.” She brushed Nyx’s hair back, just as a parent would and placed a kiss on top of her head. “You remind me of my daughter. So headstrong. So powerful. You could have the world in the palm of your hand, and you don’t even realize it.”

“Don’t touch her,” Alec growled, tugging at the malstone chains circling his wrists.

Zatana continued to look at Nyx, gazing intently. “I think she would rather have me touching her than you right now. Right, Nyx?” Zatana purred, each word laced with the power that she had over them both.

“Nyx. Please, don’t listen to her. She is not telling you the whole story. The true story. She wants you to hate me. Okay? Don’t let her make you hate me. Please.”

Nyx couldn’t conjure the strength to look at him. If she looked at him, she would break, and if she broke, Zatana would win, and she couldn’t let that happen.

“Maybe I already do,” Nyx whispered into the cold space. Nyx felt Zatana brush back her hair again, encouraging her.

“Please. Please don’t say that. You can’t hate me. If you hate me, then I don’t have anything left. Please, Nyx. Just look at me. Look at me.” Nyx could hear the fear laced in Alec’s voice. It wrapped around her heart, squeezing so tightly that it hurt to breathe, to live.

Nyx closed her lips tightly, trying to stop her bottom lip from trembling. Slightly shaking her head no, but she had to. She had to look at him one time to see that maybe, just maybe, Zatana was lying.

Slowly, she brought her eyes up to match Alec’s beautiful hazel ones, the eyes that she had fallen for so fast. When he was happy, they were more green than brown. When he was angry, they were more brown than green, and when he was scared, it was the most beautiful color that she had ever seen, so beautiful that she couldn’t even describe it. But at that moment, she saw the tears welling up. There was an element of hope in his expression that soothed the anxiety souring in her stomach.

She closed her eyes, trying to stop the tears from falling. She wanted to believe those words coming from him, but now it broke her more than it healed her. He couldn’t love her. He was destined to hate her. She was told to never trust a Detity because if she did she would lose her magic and the happiness she could possess in the afterlife. She couldn’t trust him because he was the reason she was here right now. He was the reason why it hurt so damn much. He was the one that broke down her walls and allowed her to be happy. Because of him, she thought she could be so much more than what she was . She thought she could be happy, content. He gave her butterflies and made her cheeks hurt so much from smiling. She thought he was the home she had been searching for for so long. She loved him, but she couldn’t believe that he really, truly loved her. Were the tears that suddenly welled real, or did he conjure them from some sense of how he should act if he were losing the love of his life?

It hurts. When is it going to stop hurting?

After a moment of silence, Zatana spoke, “Well, it looks like the feelings are not reciprocated. Tough luck.” She stood up and extended her hand to Nyx. “Come on, Nyx. We have things to do if you are going to complete your transition.”

Nyx glanced up at Zatana with a scowl on her face. Zatana tilted her head slightly, waiting for her to take her hand. To surrender. But she knew that even with her broken heart, she was too strong to give up. She would rather die defying her than to live surrendering to her.

The room shook as they heard the first chime of the church bell, causing a small jump from Zatana, so small that Nyx could have sworn she missed it.

“You know what is so funny?” Nyx asked with a small smirk on her face.

A muscle in Zatana jaw popped, hand still waiting for Nyx. “What is that?”

“How if you let a bad guy talk long enough, they will tell you their whole plan, and it’s the perfect distraction if you need to wait to get your powers back.”

Nyx felt her magic come back with a surge of energy so strong that it almost consumed her. Nyx inhaled the scent of magic flowing from her homelands.

Quickly, Nyx rose to her full height, lifting her hand slightly bringing a black metal spike from the ground piercing Zatana through the arm causing her to cry out in pain.

Her head slightly tilted, Nyx’s intense gaze never leaving Zatana, Nyx said, “You underestimate me. You think that breaking my heart would have me crawling to you.” A twitch of her finger caused another metal spike hitting Zatana’s right leg. “You cannot break something that was never whole.”

Nyx’s eyes glowed emerald as the church started to rumble. She lifted herself off the ground, staring down at Zatana with a truly horrid expression. She focused all the energy she had on tearing this one spot apart. She would tear down the church and bring every piece of metal on Earth on Zatana to cause a fraction of the pain that Nyx felt. She would call on nature to bring down this abomination to Hell. She would draw upon every ounce of magic she didn’t even know she possessed to make Zatana suffer.

“Nyx! Stop, you’ll take the whole place down,” Alec yelled, yanking the chains harder. Ripping one of the chains from the crumbling wall, his focus was still on Nyx. There she was, levitating in the middle of the room, hair floating, metal floating around her as if it all was her own personal shield. Vines, roots, and branches started to penetrate the floor, locking them inside the ruins of the old church. Her eyes were no longer the amber color he could see his future in but emerald, strong and bright.

“You took everything from me. I’ll make sure that I am the one making the fatal blow,” Nyx gasped, materializing another metal spike and using it to pierce Zatana in the stomach, causing her to howl in pain.

A strained smile crept on Zatana’s face. “There she is. Your metamorphosis has started.”

As Nyx took in more magic the ground shook harder. Cracks appeared around them. The wall crumbled with the amount of magic that Nyx was applying. She shouldn’t be able to do this. It should be killing her, but it had the opposite effect. It felt like it was healing her, making her stronger, more dangerous. Something they should be afraid of.

She didn’t care if she died as long as Zatana died with her. She would tear this church down and drag her body into Hell herself if that meant that everyone that she loved would be safe.

A trickle of cold touched Nyx’s spine causing the hairs on her arms to stand up. Magic. Narrowing her eyes, she stared at Zatana with a confused expression. She could feel magic, but she didn’t know whose. It felt sweet and viscous like honey.

A bright pink light formed in front of Nyx, breaking her line of sight of Zatana. Nyx lowered herself on the ground dropping all the metal that was forming around her and stopped the building from shaking. Her hand hovered over her eyes, blocking the light from blinding her. Her gaze fixed on the center of the room, where the very air had split open, spilling crackling pink light. She squinted trying to get a look into the light. A tanned slender hand had come out of the light coming towards her. In a matter of a second, the hand grabbed Nyx’s wrist pulling her into the light, yanking her from the church into the unknown.

The light faded, leaving nothing but pink particles in the air.

“Where did she go?” Alec yelled at Zatana as she pulled herself off of Nyx’s spikes, “What did you do with her?”

“That wasn’t me. I don’t know what that was,” Zatana replied with an equally shocked expression.

“Where did she go?” Alec whispered to the empty spot where Nyx had been a moment before.

At that moment he could hear the rumble of thunder rolling through the city, and he knew. 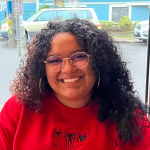 Yomari Lobo was born in Las Vegas and is a graduating senior, getting her Bachelors in Psychology. She writes books, which, considering you’re reading this, makes perfect sense. She can usually be found reading a book, or writing about all those crazy ideas in her head. She is currently working on her first novel that she hopes will be finished by the end of the year.