The arm was back. It hung mangled and twisted over the bathtub’s edge. Benjamin Rye peeked into the tub, despite instinct screaming to flee, and saw his reflection in a pool of brown motor oil.

His reflection was not alone.

A woman’s silhouette stood next to him. Her shampoo’s sharp scent clogged up his nose and eyes. He stumbled away from the tub, crashing into the sink’s counter, knocking belongings onto the floor.
The arm snapped awake. It creaked and groaned like old, rusty metal as it untwisted itself, and beckoned Benjamin with a flabby finger, its flesh barely clinging to bone.

“Leave me be!” he screamed and barged out the door.

A dark and empty countryside road greeted him. His footsteps faltered when he realized it was the road that led home. Laughter bubbled up in his chest. He was almost there.

The red diecast toy car he had owned in childhood, appeared at his feet. Benjamin gingerly picked it up. He bounced the metal body in his grip and grinned, admiring its weight and impenetrable skin. Everything about the toy, even its fat rubber wheels, were capable of executing serious damage. It had been proved many, many summers ago at a family picnic. Benjamin had slammed the car into his little cousin’s pouting face, resulting in a bruised nose and a torn, peeled lip. Benjamin chuckled as he remembered his mother had stripped the weapon away for everyone to witness.

But on the ride home, shielded inside their 1964 Chevy Bel Air cruising down sweltering pavement, his mother returned the toy to him. “Next time your baby cousin whines,” she had advised, voice smooth and soothing to the ears, “aim for the little shit’s jaw.” Her words echoed into the horizon.

Inside the toy, Benjamin discovered something new. At the steering wheel was a tiny, old man dressed in a moldy suit and a bowler hat. Stamped onto his flaccid, freckled face was a sour smile. The old man pointed to the empty road’s razor edge where a pink neon club sign, ‘Paradise’, floated in the night.

Suddenly Benjamin found himself inside the car, sitting in the seat next to the old stranger.

The engine howled to life, and the life size toy car shot down the road. All remaining sentimental longing rattled into confused dread. He clasped for the seatbelt only to find it was his mother’s dismembered arms. Her bright pink kitchen gloves constrained him as the old man swerved into the dirt.

“You did good, mama’s boy,” sneered the old man, his crooked frame pressed into the scorching hot metal seats. Rubber screeched back onto the asphalt.

“I left my goodness in my coat back home,” Benjamin replied, voice calmer than his stricken mind.

The car zoomed past lamp posts and gnarled trees. Tied to each tree trunk was a balloon with ‘Congratulations’ written in sharp letters. ‘Paradise’ came closer and closer.

“Your coat, again,” said the old man. A woman’s bloody shawl was thrown onto Benjamin’s lap. The shawl was covered in soil and burnt rubber.

The old man clicked his forked tongue. “I tell you every time. Don’t you remember?”

Benjamin shoved his mother’s hands away and grabbed the old man’s jacket. “Tell me!”

The car soared off the road and shattered into the pink neon sign.

Benjamin jolted awake and alone in his dark room at the residential care home for seniors. He slid out of bed, careful not to trigger his sciatica, and limped into the chair facing the window with the nice garden view.

Everything was the same. No one knew about the failed deal or what had been buried near Glasgow Road for the past thirty years. Not even his family knew about it.

He dragged a heavy hand over his tired face. Everything would have been fine, if not for the damn nightmares. 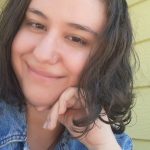 Angelina Hope is a 22 year old writer studying for her Bachelor’s in English. She enjoys reading, writing, exercising, and pestering her two spoiled cats.