The One Who Inflates The Clouds

Thousands of feet below Nubes is an enormous park with hardly any people in it. What a shame, she thinks. I’m going to make them love being outside.

“Huh?” Nubes didn’t realize her advisor was speaking the entire time. He lets out a deep exhale.

“Just shade the people. The goal is to make humans happy. Here’s the pump.” He hands her what looks like a bike pump. “Good luck Nubes. Your work today will be evaluated later at the office.”
He steps into his cloud car and floats off, leaving Nubes alone.

Nubes holds the pump to feel the weight of it: the pump she’s been waiting to use for years. She places the pedals of it under her feet with care. She pulls the lever up, then down, and there it is. A small bubbly cloud floats in front of her.

“Wow.” She inspects it. “It’s perfect.” She reaches her hand out and it is so soft. She can’t help but put her whole face it in and when she pulls away an imprint of her face is left on it. She laughs at the face, but then she has an idea. She works her hands inside the cloud and molds it until it is to her liking. When she is done, she steps back to look at her work.

“Mama look, a hippo in the sky.” A young boy yells at his mom. His mother looks up, confused and sees the cloud. To her surprise it looks exactly like a hippo. She can’t help but laugh. Other people smile too as they look up to see a hippo in the sky.

The laugher grows louder, loud enough for Nubes to notice. She looked down to see people smiling at her work.

“I have to make another.”

She takes her pump and inflates another cloud. She molds this one into a different shape.

“Mama look, that ones a turtle.” Everyone stops what they’re doing to look at the new cloud that looks exactly like a turtle. They smile and laugh, but soon look away.

“Do they not like the clouds? What is it?” She tries to focus on what could be the problem. As she peers down, people squint to see her clouds.

“The sun! It’s too bright!” She grabs the pump and begins pumping more clouds. Soon she has enough to cover the park.

Below Nubes, a group of friends talk on a bench. One girl looks up.

“Is it just me, or does that cloud look like a Kangaroo?”

People from everywhere rush into the park to see the zoo of clouds. People call their friends and family. Someone calls the news. Soon the park is packed with people coming to see the sky.

It makes Nubes happy to see this. She grabs her pump again and inflates another cloud. She sculpts it and pushes it front and center.

“Look, it’s a lion,” says one stranger pointing at the sky.

Nubes has never been so proud of herself. She imagines her future as a cloud inflator. She’ll go down in cloud inflator history. No one will ever be as good as her. Kids will forever talk about the shapes of animals in the sky. A loud boom brings her back into reality.

She jumps and hides behind a nearby cloud.

People below her look up asking themselves the same questions. Then the first rain drops fall.

“No no no. What did I do wrong?” She looks at her work and she sees it. The animals she made crash together and make a scary-looking monster storm cloud. Another loud clap of thunder jolts her. Children scream down below.

She grabs her pump and walks up to the monster cloud. She sticks her hand in, then her other hand, then her entire body. She falls into the cloud to realize the middle of it is hollow. It is like being in a giant empty room. Think Nubes. She grabs a fist full of her cloud hair and tries to think. Another clap of thunder followed by a flash of lightning interrupts her thinking.

“Did you see that?” A child points at the sky. “That looked like a person with big hair.”

Everyone on the ground turns around to look at the sky but there was nothing to be seen in the darkness. Then there’s another flash of lightning. And for a quick second you could see it.

“I saw it!” shouts another person, looking up. “It looked like a person in the clouds when the lightning lit up the sky.”

A boy points at the sky. “That was a monkey eating a banana!” People start walking back to the park, some with umbrellas and some not minding the wet. Nubes continues her show until the winds eventually blow the storm clouds away. It is a success.

“Your stats show that you scared 1,645 children using thunder, the lightning struck down 3 phone polls, and over 4,000 people came down with a cold due to the sudden rain storm. There has never been such negative stats like this in cloud inflator history.”

Nubes sinks in her seat hearing her advisor’s evaluation.

“But you also made the most people happy.”

She begins to light up.

“So, you’re not fired. Just be mindful of phone poles.”

Nubes shoots up and shakes his hand. “Thank you, sir!” She takes her pump and goes out to make another joyful storm. 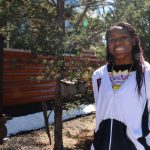 Tanae Taylor is a fiction writer from Los Angeles. Growing up she always liked reading and watching movies, but it didn’t occur to her that she could tell stories too. She majors in creative writing at Cal State Long Beach and is a storyteller in her spare time.