I’ve tried to sit down quite a few times this past week to get myself to write something about my new album ‘Stolen’ but I’ve found myself unable to do so! Ideas have come — some of them I’d still like to explore in the future — but I haven’t yet been able to ‘catch’ them in their entirety. Part of me thinks it is because I feel I’ve already said everything I want to say about ‘Stolen’ with the video interview and fear the redundancy, but that could also just be a complete rationalization.

In my frustration, I did end up writing a poem — not at all about ‘Stolen’, but about the frustration of being unable to write about it at all [or about any particular idea, for that matter]. Here it is:

I lay in a glorious nest;
One I’ve spent the day dreaming of dreaming on.
My eyes are shut, and my world is much smaller.
It unfolds from beneath me, and wraps me
In a warm embrace I’ve been so sparingly drawn.

The silence is so clear, I don’t even hear it.
The echo of an old pray’r,
And the mute faces hanging on my wall.
When suddenly, the grandest of ideas,
With its immutable spirit,
Comes bouncing through my lair:

I waste time in my futile attempt to somehow ignore
The relentless summoning of creation.
I sigh, as fruitful contempt brings my feet to the floor
— I’ve always been a slave to inspiration.

But then the pieces escape me,
And the idea lingers in thin air

It puts a halt to its jitters,
It glimmers faintly,
It leaves a cold trail,

Until it is no longer there.

My muse, she teases me.
She mocks me, her petulant fool.
And so, I am left with my sleepless whining.
And, in turn, so are you. 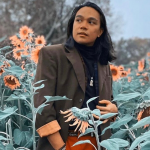 Justin Luis is a singer/songwriter currently based in Nashville, TN whose fondness for words [and in singing them!] has taken over his life!!! *please send help*