Everyone in the halls stunned
After years of being shunned
What else could they expect
Months of me needing to defect
No one fully understands why I left
All of your so-called friends are nothing more than a theft
Not once after exile did they reach out when they swore they would
So, I did something they never could
The unthinkable occurred
In time, darkness lured
Kill those stars representing the front porch
Bury them under a fiery scorch
Absolutely zero regrets with my decision
To give them such lethal precision
Letting me go was the worst mistake they ever made
How will the sacrificial lambs be paid? 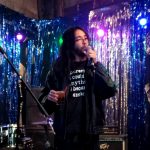 Matt Nowak is a storyteller, poet, and comedian throughout the Nashville scene. He runs a weekly spoken word spoken mic every week at Twin Kegs II. He is a member of the Prodigal Poets and hosts the Dead Inside Podcast.