my father through a sniff: an essence

sloping into a birthmark of scenery,

and smell, too. In my hands, a verb

becomes what defines a face the most:

how to yawn into soil with cold toes.

In this poem, a girl kneels herself into

a cavalcade of naming every juice that

stains her lips poison. Who doesn’t

know what it means when a psalm fer-

ment into blood under black tongues?

It means, even god is racial, even god

discriminates between which tongue

holds the leverage to call his name and

a watchdog of his color to know whom

to find reprieve from: god or spirytus

vodka. You see, at birth, i was the size

of my mother’s nipple, and when i was

vival means: how to not sink in a tulu.

What i remember was: on every juma’at,

her gele, and father, in his kaftan coffers.

The response was: god recognizes a skin

that beacons the night better than the one

that covers what light remains of the day. 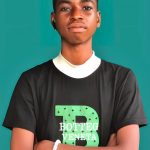 Sunday T. Saheed is a Hilltop Creative Arts Foundation member. His works have appeared or are forthcoming on Brittle Paper, Rough Cut Press, Temz Review and others. Reach him on Instagram @poetsundaysaheed