Maybe I Should Get Bangs

January 10, 2022
I laid on the couch sipping wine at the end of another long day of nothing. I’d been working from home full-time for three weeks and I was so bored and lonely that I was going to a store—any store—most days just to have some interaction with the outside world. I’d become that girl. The one who comments on a purchase you’re about to make, then keeps you in conversation for a full hour even though you’d given every sign that you needed to get going.

Me: “I have chronic anxiety.”

Random human: “Well, I have to get going.”

Me: “What are your thoughts on gun control?”

I’d become like a cat with claws dug into the clothes of everyone who came into my orbit. No matter how hard they tugged, I wouldn’t come unstuck. I’d cling until they pretended to have a bathroom emergency, which a surprising number of humans are willing to do to get away from a Chatty Cathy.

This was pre-Covid—a time when working from home was a rare, coveted privilege. However, as a social person who feeds off the creative energy of others, I hated working at home all alone. I couldn’t stand wiggling my mouse to pretend I was busy working when I’d actually finished all my work at 10 am. I despised dialing into meetings instead of just skipping into a conference room, I missed vending machine snacks, and I really missed my work friends. To be honest, I had always known working from home full-time wouldn’t be good for me. However, I had no other way to stick it to the man but to negotiate it into my “apology package.”

I slugged my wine as I let the anger course through my veins for a moment. I had been caught in a massive round of layoffs after our new, uber-innovative publisher told me not to worry about the rumors—people he felt had the greatest potential would be saved from the layoff. As we sat at the ugly oak conference table in his office, his mouth curled into a half smile revealing his capped teeth. He winked and said “Listen, I’ll be honest. There’s a life raft, and you’re on it.”

Imagine my surprise on layoff day when I was the second person let go. The best part? They waited until I was finished with the two weeks they gave me to wrap things up, then called me to offer me a new, better job in the department with a pay bump to….drumroll please…$38,000. How could I resist?

Even though I’d get to continue working for one of the biggest publishing companies in the world, I was filled with rage every morning when I signed into the VPN. These people didn’t deserve me. They didn’t appreciate me. They’d shown me that I was just a number, then they invited me back like a hot, but sleezy, ex who I ran back to even though I knew I’d get my heart broken again.

That night, in the pulsing glow of the television, I began to realize just how many women on TV were sporting bangs. They all looked so cool—way better than I did in the sweatpants I hadn’t changed in three days. I had been wearing a messy bun for so long that I was sure it would stay piled on my head if I removed the elastic. What better way to show those idiots what they were missing by looking irresistibly cool the next time I made an appearance at the office? Then they’d have to realize exactly how valuable I was—a cool girl with trendy hair had to be able to sus out authors to acquire whose books millennials would clamor to read.

This idea was fucking brilliant.

Within seconds, the delicious thought of creating a revenge persona took me off my feet and dragged me into the bathroom like a riptide. From that moment on, I was no longer in full control of my actions. I was driven by the energy of someone who had been royally screwed and needed to make a move. Why this was my move. . . well, I think that’s a question with many answers. We love to chop a bang during a crisis. We assume it can’t get worse, so why not add something actually worse to the equation and see what happens?

I opened a tutorial on how to cut your own bangs on YouTube and precariously balanced my laptop on a pile of towels. I hate, and I mean hate reading, listening to, and especially following directions of any kind, so instead of listening, I sloshed more wine into my glass, wrestled my hair out of the messy bun, and high on adrenaline, I copied what the girl on my screen was doing.

Enjoy life where people think you know about obscure bands.

Only. . .when I let the hair go, it didn’t look like that at all. It was not good. I mean, not good. I’d somehow mistakenly followed the directions backwards. I’d cut my hair so the longer pieces of the triangle were in the middle, not the sides. As the girl on the video parted her new, effortlessly chic curtain bangs, I stared at my reflection. It looked like I’d just face planted into a paper shredder and someone hacked at my hair to save me.

There was no going back. I poured myself another glass of wine and dug through my drawer searching for my nail scissors. Those were sharper than the blunt kitchen shears and would be my saving grace. I rifled through decade-old eyeliners, tubes of lipstick, blushes, and bronzer before my hands reached them. As soon as they were in my hands, I felt hope.

The problem was, as I studied my reflection, I had to admit there was no way fix it aside from lobbing a blunt bang that grazed my eyebrows. The end pieces were so short, they were fraying, so, I reasoned, going shorter all the way across would make it look intentional. I gulped the wine, picked up the nail scissors and began to hack away. My hair was dropping into the sink at an alarming rate, but every time I got it to look evenish, I’d see another huge mistake—one that could only be fixed by going shorter. High on dopamine and fear, I didn’t stop, I kept going.

When I was done, I looked like a walking crisis. My bangs were so short, the only thing I could do was to embrace the crazy and pretend I’d paid someone to give me pixie bangs. Then I realized pixie bangs weren’t a thing so I’d have to own the crazy without pretending anything. In hindsight, I wish I had sought revenge by taking up knitting or becoming a plant person. But I’m an all-or-nothing gal, so I chose to go big, which snowballed into something truly terrible.

Once the hair was cleaned up and the nail scissors were safely tucked in the very back of my makeup drawer, I laid in bed. I couldn’t sleep, haunted by all the huge meetings I had coming up that I had to attend in person. My anxiety shot through the roof as I remembered our quarterly sales meeting was coming up and I’d have to be on stage, introducing our entire global sales team to the next round of books in our pipeline. I also thought about a dinner date I’d planned with Jimi and my next trip home to New York, which was swiftly approaching. I winced when I realized I’d have to do it all with evidence that I’d come undone plastered to my forehead.

The next day, I woke up hungover and ashamed. But when something bad happens, you can’t push it away or pretend it didn’t happen.

My impulse bangs became a visual representation of growth and healing. I began my journey frayed, uneven, off-kilter, maybe a little wild. Then, over time, things even out, they become less wild and a little more purposeful. You learn to embrace the change, groom it, even appreciate it. So, I’d celebrate my bangs as a symbol of what makes me unique—a combination of drive, impulsivity, creativity, and utter insanity. 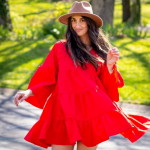 Written by our founder, Alee Anderson. Click HERE to learn more about her writing journey and career.

Right on my man!