“It’s been almost one-hundred and fifty years since the Cities were first formed as a refuge for those who wished to escape the chaos of the Village.” My teacher paced in front of the widescreen that displayed today’s lesson plan, rhythmically tapping her fingers against the side of her clipboard.  She was a middle-aged woman with short blonde hair, cut at the steepest angle possible along her jaw.  “The founders of the Village believed in freedom over all else.  Can anyone tell me why that might be a problem?” She stopped pacing so she was in the center of the screen, and her flat shoes squeaked.  Her silvery-grey eyes trailed along the oval-shaped classroom in a swift motion as students began to raise their hands.  I knew the answer, but I never answered the first question of any class.  It was bad luck.

“You, Jonathan.” She said, pointing to the back of the room.

There was a moment of silence.

“Wait Mrs. Freeman,” Jonathan Hale, or ‘Jonah’, hollered from the direction Mrs. Freeman had pointed.  “Me, or Jonathan Malory?”

There were two Jonathans in this class, and at least three others in this grade alone.

“Well,” Mrs. Freeman sighed, smoothing her black silk skirt as she decided how to respond.  “I had you two moved to opposite sides of the room last week, didn’t I?”

Jonah contemplated this for a moment, as if he really couldn’t remember.  “Yeah, I think so,” he said.

“And which direction did I point?”

“You pointed at— oh.” Jonah turned bright crimson as he sunk into his chair, and hushed laughter dotted the classroom for the briefest of moments.

Mrs. Freeman smiled softly as she pulled a light blue stylus from the front pocket of her white blouse.  “I would still like you to answer the question, Jonathan,” she said.

As Jonah regained his composure and the red drained from his face, Mrs. Freeman used the stylus to adjust the slides on the screen behind her.  Now instead of the lesson plan, it displayed her question at the top: “Why might it be a problem to value freedom over all else?”

She stepped away from the widescreen and sat down at her small, sleek desk.  It was placed on the left side of the room, away from the door, and contained only a few pens, papers, and a laptop.  I watched as she typed Jonah’s answer into the slide.

“Because then all kinds of rules go out the window.”

Jonah’s actual answer had a lot more “uhh’s” in it and ended with an “I think”, but either way his answer was still a bit off.

“That’s a very good answer Jonathan,” Mrs. Freeman noted, and I smiled as I waited for her to confirm my own answer, “but it’s not the whole story.” She paced back to where she was standing in the center of the screen.  “It’s not necessarily that rules go out the window. You can’t have order without rules. It’s the enforcement of those rules that goes out the window.  They become general guidelines that people can choose to ignore. Society becomes chaotic, and eventually collapses.” She paused. “That is why we have our Military. To keep society from collapsing.” She smiled as students began to nod in agreement, myself included.

“Can anyone tell me why the Founders of the Village dissolved the idea of having a Military?”

This time, I did raise my hand, along with a few other students.  I was first though, and so Mrs. Freeman called on me.

“You, Mason,” she said.  She flipped to another blank slide.

I cleared my throat.  “Because while the Military exists to protect people, they infringe on a person’s ability to harm another person, which used to be considered a right. However, that right is harmful to the society where it takes place, as it breeds distrust and resentment between citizens. The idea of a Military force was dissolved because it removed the possibility of total, unsupervised freedom to harm another person.”

“That’s right,” Mrs. Freeman said.  “That’s exactly right.” She turned towards the widescreen and switched to a slide that displayed a shorter variant of what I had just said.

When class was over students poured out of the classroom’s sleek, black double doors in a jumble of shoulders and elbows.  I shoved my way into the front, mumbling apologies to no one in particular and keeping my head down.  The school hallways were wide and had a defined traffic system to keep movement efficient, and people on time.  I slipped my way into the line moving left, which was across the hall from the door, and traced my hand along the smooth white wall as I walked.  People chatted all around me.

I was by myself, and my thoughts ran wild with useless speculations about what the others might be talking about.

It wasn’t long until the “locker room” came into view.  The locker room was a circular, 3 story room, with a glass, kaleidoscope-like ceiling.  The “floors” were actually like balconies and had a huge hole through the middle of them and a single large beam, so the ceiling could be seen from any floor.  It was one of the only windows in the city that showed the outside, and that made this my favorite room in the whole place.  Layers of holographic television screens went up the beam, displaying class schedules and various news stations.

I climbed the stairs and made my way to my own locker, which was on the second floor.  As I exchanged my books, the screen behind me blared the afternoon news.

“—and Central City’s First Commander has been making new plans to help our neighboring City with those illegal cyborgs.”

“Speaking of which, John, another report came from the local authorities. They say humans might be aiding in the rebel cause.  What do you think of that? Crazy right?”

“That is crazy.  Did someone swap your papers?—”

I sighed.  Cyborgs.  The plague that humanity created— people that became metal monsters when they replaced too much of themselves with technology.  It’s kind of irritating how people can be so…  blind.

My watch beeped five times and it snapped me out of my daze.  I had a class in thirteen minutes.  Quickly, I grabbed my books and headed for the hallway opposite to where I had come.

The next few classes breezed by, and a few project assignments made themselves known.  After lunch all of my classes felt the same way.  Slow.  My books felt heavy and my feet dragged, reluctant to move me down the hundreds of identical hallways that made up the school.

It was always the same.  Every day of my life so far had been exactly the same, and I was beginning to think it would never change.  Contrary to what my parents said, that “everything would change soon,” and I was “almost old enough for the system to assign me a job.”

It felt like I was going to be “almost old enough” for a long time.  Too long, really.  Way too long.

My locker door slammed shut for the seventh time that day, and I sighed.  One more class until I could go home.  Part of me liked the security of knowing exactly what my day would look like, and the other part of me couldn’t wait to get a job outside of school.  What was the rest of the city really like? I had been everywhere, but I hadn’t stayed in any one place long enough to experience what it had to offer.  Come to think of it, have I ever done anything outside of my education?

I trudged on, watching the others with a new curiosity.  How did they live? What did they do when no one was watching?

In my vacancy of mind, I allowed myself to wander without watching my steps.  That was…  to say the least, a bad idea.

Forester, who I had the unpleasant experience of ramming my nose into, whipped around to face me.  He was a mountain of strength, and one of the tallest people I had seen.

“Hey! Watch where you’re going, doofus!” he yelled.  His eyes softened as I mumbled an apology, and his broad shoulders relaxed a little.  “Oh, sorry,” he said, “I thought you were someone else.”

“No, you’re right.  I should have been paying attention.  I’m sorry…” I said.  I turned to walk away, furiously rubbing my nose, but he cut me off.

“Wait, I know you, right?” He tilted his head, as if the different angle might help him recognize me.

“Yeah,” Apollo, one of Forester’s close friends, answered.  Well, I’m not entirely sure they’re close, but I’ve only seen them separate twice.

“He’s that one kid who knows everything,” Apollo continued.  He smiled at me devilishly. 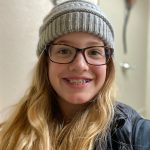 Krisell Silva (Chris-ell), has a passion for most things creative, sleeping in, and her budgie, Breezy!