From Corporate to Creative: Fielding the Freelance World

My first day in corporate America began with my 45th alarm blaring as I lay on a bare mattress, surrounded by beer cans and a layer of dirty clothes. I’d envisioned this scenario differently. In true Virgo fashion, I had a penchant for pretending I had my shit together. I’d prepared for the big day by ironing a plum pencil dress and laying out a pair of sassy emerald pumps as well as my favorite gold accessories. I’d planned to shower and turn in by 9 p.m. with my hair pinned in rollers, so I could wake up the next morning fresh, with a head full of cascading curls.

However, a series of poor choices, including more vodka shots than I could count, left me waking up late the next morning, hungover, in jeans, next to the naked, hairy body of my edgy BMXer boyfriend. He was a totem of everything wrong in my life, but he was an established artist and successful musician. By Nashville standards, I had it all.

Except time. I crawled into the front seat of my car, trying to pull together some semblance of dignity as I wondered why, after spending thousands of dollars in therapy, my boundaries were still so poor. I considered calling in; saying that I had car trouble so that I could at least give myself the morning to shower, but I chose to be timely instead. After all, it was my first big-girl job.

Healthcare was never my dream, but I was grateful to find an administrative position in a competitive city that paid more than minimum wage. As a writer and mixed media artist, my plan was to work full-time to afford insurance and all the other superfluous benefits creatives latch on to when they are hiding from their dreams. I convinced myself that it made sense, that fluorescent lights and gray cubicles were only temporary. I promised myself that once I could elevate my side hustle, I would leave the corporate world and never turn back.

As I stepped off the elevator feeling sick to my stomach. My whole body rejected the experience from the start, but I quieted the pain by feigning gratitude. At least I get to live in Nashville and I don’t have to move home, I thought. I struggled through orientation, lost in fantasies about BMX Boy naked. I mean, anywhere else was better… right? Finally, I was directed to my desk where the real training began—with rectums. Lots of rectums, and no, I’m not solely talking about my co-workers.

My job consisted of combing through hospital systems and saving hundreds of medical records, page by page. I was paid less than my male counterparts to do it. That was something that was only amended years later by a new COO, someone who instigated a string of promotions for myself only to openly regret later.

“I should just fire you,” he’d say. “You’re so creative, you’re made for so much more than this place.” My jaws and muscles would clench in trepidation, knowing he was right but too afraid to take the leap. The more money I made the more incentive I had to stay, even when the toxic culture was killing me.

As I sat in a gown in the doctor’s office, he looked at my chart and told me I didn’t have an ulcer. Instead, my intestines were bleeding from stress. As I put my clothes back on, my phone lit up to a million emails flooding my inbox (a benefit of being a salaried employee in leadership) and I wondered if the insurance was worth five years of daily cries in the bathroom.

So, I started applying elsewhere, compulsively. Anyone who has ever job hunted in Nashville knows that—well actually, they are all still applying. It’s the most dehumanizing experience, primarily because it facilitated my dependence on a job that was bankrupting me mentally and emotionally. By January 2020, I had been to hundreds of secret interviews.

I had been praying to The Wild Silky Thing (some of you may know as baby Jesus), using all my tarot decks, and rubbing down every golden calf in between so that I wouldn’t get laid off. And I didn’t. At least not during the first round of cuts.

I spent more than 1800 days of my life oscillating between resentment over, and fear of, losing a job that was detrimental to my soul. I’d imagined packing up my desk, boxes full of artwork and twinkle lights, assuming it would be on my terms. On May 5th, the second round of cuts came.

It was the furthest thing from my mind as I’d coincidentally taken PTO for a mental health day. I received a call from an unknown number as I was driving down the interstate. The familiar voice of HR and our CFO were on the other line with a script: We regret to inform you that due to the global pandemic caused by the COVID-19 virus… My time in healthcare had ended.

It didn’t feel like I thought it would; I wasn’t scared, but I wasn’t excited either. I just kept driving, not knowing where I would end up.

Unemployment felt right at first. I hadn’t had a vacation in years, so it felt good to sleep in, ease into my canvas, and grieve the years I’d lost. I knew I had some big choices to make and the universe was giving me an opportunity to carefully map my next steps. Naturally, I considered doing what I had always done, but my body could no longer ignore its symptoms. The answer was clear: I absolutely could not go back. I didn’t know what moving forward looked like, but I knew it involved believing in something I couldn’t see.

In June of 2020, I posted on Facebook about transitioning into freelance writing. As synchronicity would have it, my dear friend (and now mentor) Alee Anderson was looking for an apprentice for editorial work. She taught me the ropes of publishing as we began collaborating on projects in the ghosting world. By August, I was contracted by Kevin Anderson & Associates in New York City and a few other agencies to write novels. By December, my freelance income had surpassed my highest paying salary.

Today, I write books and sell my art for a living. Sometimes it feels surreal. I can’t tell you how many people have treated me as though I chose the wrong path, but I never doubted my decision to lean into who I was made to be, to use my gifts and make an impact on the world. I get to be a conduit of stories and refine my skill set by bolstering the voice of others.

My advice to every young writer is to go against the grain from the beginning. Pursue your gifts. There’s only one way to not fail at freelancing, and that is to persist. You have one job and it is to create. Release the rest to the wild, silky, ethereal something that will always have your back—and leap. 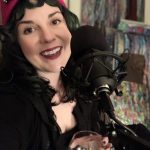 Autumn Jade Monroe is a ghostwriter, mixed media artist, and hip hop instructor living in Nashville, TN. She has a penchant for poetry, podcasting, and guzzling red wine. In her spare time she enjoys reading books on philosophy and creativity, and napping with her fat, grey cat, Ello.