Closer Than You Think

Chris was anxious with anticipation as she sped down the deserted highway. It was around 3 am and she was the only car in sight. She was quiet with her thoughts, thinking things through. She peered into the rear-view mirror and saw how aged she looked. Her caramel skin was ashen, her hair was a frizzy mess, and her eyes twitched. She looked like she hadn’t slept much and doubted she would get any when she finally got to where she was going.

Chris began to question the wisdom of this trip. Did she really think her father would help her after their falling out? She guessed she would find out once she was back in her childhood home…

Chris found texts between her best friend and her husband. She grew pale reading the dirty texts and found explicit images. She stared at the naked photo of her best friend who had a flat stomach, small breasts, and barely any body hair. A body that her husband apparently preferred now. He always admired her body, even worshipped it once, but lately, they barely even kissed.

For divorce purposes, she needed to get her shit together before serving him papers. A week after she found the texts, she met with a lawyer in her office building. There weren’t a lot of specifics in their prenup. She wasn’t going to get anything if there was evidence of an affair on her part, but nothing mentioned if her husband cheated. It looked promising that she could get at least half of what her husband made plus their assets.

As she stood to in her cream tweed suit, Monica agreed to work on Chris’s case and take care of it right away. She also had a cheating husband and went through a divorce.

After her meeting, she drove to the new hotel in the city and checked into her room. It was more luxurious than she anticipated with its plush cream rug, beige color scheme, and overall minimalist décor. Chris peeled off her work clothes and took a nice long bath in the jacuzzi tub. She enjoyed a glass of wine while her body soaked and was full of bliss. When the bubbles dissolved and the water became cold, she got out and dried off. After ordering another glass of wine, she got into bed and opened her book…

Chris woke up with a jolt to a bright room and the book on her chest. She didn’t remember falling asleep and was confused for a moment. After looking at the clock that read 2:03 am, she replayed the events from earlier and thought. Why should I be the one to leave the house? He’s the one that cheated. I should kick HIS ass out! She threw the covers off, got out of bed, and threw on a pair of jeans, her new Frye boots, an old band tee, and her leather jacket.

When she arrived home, her husband’s black Audi was in the driveway alongside her best friend’s silver Lexus. She slammed the car door and ran inside. Screaming her husband’s name relentlessly, she stomped from room to room looking for him. She sprinted upstairs and ran straight to their bedroom. When she threw open the door, she stopped cold in her tracks. A trail of blood was on the floor, all over the bed, and splattered on the walls, except… no bodies. 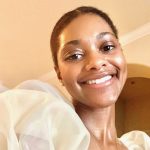 Diahanna Hampton has a BA in Art Studies from North Carolina State University. When she graduated, she spent some years doing administrative work and looking for my dream career. She is currently a freelancer in marketing but after taking an online course, she found a passion for creative writing. Since then she has been working on her debut novel.