Become Your Character- For Better Or Worse

“If you’ve read it, don’t write it,” that was a piece of advice I took from my Creative Writing tutor, Elspeth Barker, back in 2009.

We were talking about clichés within genres and how dialogue should flow.

I’ve always enjoyed dialogue. It’s the one tool that gives me an ability to put my own voice into the storyline- to react the way I would, to shout or sneer the sentences I wish I would have said in different scenarios.

I have the most fun writing when I put myself in my character’s shoes.

Sometimes I’ll base a character upon a friend and demand they tell me what they would do in a certain scenario.

“Well, yeah, it’s based in a public house in a fantasy world. There’s always alcohol in my books.”

Fuck it, I log in my internal note pad. And because it’s so honest, so anti climatic- it’s perfect.

“If you can predict what the person is going to do or say- change it,” was another one of my tutor’s tips.

Sometimes I’ll be writing a scene full of drama and intrigue. I know the direction that it would make sense to go. And because of that piece of advice, I will twist it in another direction. It’s fun practise and keeps you on your toes.

But my greatest piece of knowledge that I could share is to put yourself in the main character’s shoes.

It’s essential. Well, it is for myself in any case. I am able to get through life because I am safe in the knowledge that when I return home, I can boot up my laptop and fall back into my story. If a method-acting version of writing exists- this is it.

Sometimes I’ve made choices, good and bad, because I knew my character would make that decision. I wanted to see what would happen as a result and how they would deal with the consequences that came from those decisions.

It’s sadistic, obsessive and usually requires a lot of wine to get into the depths of my characters. I hold to the opinion that putting yourself in your MC’s shoes will give you the truest depiction of humanity that you can possibly attain in writing. And the greatest escape.

Make yourself vulnerable. Open it all out. Put your hopes and fears and general characteristics into your MC. Make them human. Make them faulty, flawed, imperfect. Make them short tempered. Make them people pleasers. Make them self conscious or over compensating. Make them loud or overly shy- make them yourself. Or the parts that you feel comfortable enough in sharing.

When I began to write Maddox Black, I had no idea of the well that would burst as a result. After three books, I feel like she has drained my life blood. I have to physically and mentally get myself in a certain frame of mind when I write her. I get overly obsessed about her life, her feelings, her characteristics. I have to transition into her frame of mind to faithfully write the words that pour out of her mouth. Because they are my own.

When I write her scenes, I don’t see words anymore. I can smell the stale beer that has been spilt on the rotting tables. I can feel the texture of the floors as I walk, the mixture of hay, mud and decaying wooden beams. I can feel the hunger in her stomach. I can feel her thirst for rum. I can feel the discomfort of her cloak, sodden by rain. The distrust. The need for companionship. The need for- something. Anything. But being unable to ask for it. Unable to open herself to it.

And suddenly, I am no longer sitting in a chair before an open fire in the freezing October chill. I am not myself. I am not Elizabeth Earle. I am Maddox Black. All of my ills, wishes and needs become hers.

It is within our nature as writers to second guess, regret or doubt what we put into our books. So I say, put yourself into them. Put yourself smack bang into your character’s position and really imagine what your thought process would be. How you would react. Respond. Then at least you can know, that regardless of anything else, your book will have essence.

It will have you.

And that is the most important thing about story writing. 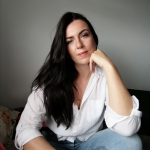