Out of the darkness, came one word. Idea.

Who was I speaking to anyway? Was it me, or-

Me. Yes, there was definitely a me around here, or, the other word for it… I.

Yes. Me, myself. I was here, that was for sure, although… I felt too light to be me. Airy. Almost as if something had been here before, that was now… free. Somehow, it was very liberating. That, and the light. Light flickered ahead -no, around me. Faint, but unmistakably there. It wavered in shades of turquoise and blue, formless, yet at the same time growing clearer, closer…

Suddenly, someone yawned. A strong, vivid sound that reverberated around all the corners of the inner me. It was so unexpected and out of the blue, literally, that I had to shake off some blurriness surrounding what must have been my head. For the person who yawned was no other than Maize. But also not Maize, if such a thing were possible. She stretched out and bent her back in a magnificent arch.

‘It’s such a wonderful feeling to be free again,’ she said in that voice that was hers but not hers.

As my phantom eyes adjusted, I noticed there was not one, nor two, but eight of us filling the room with our presence. Manu, Reuben, Yorrick, Kitty, Maize, Natasha, Baird, Dirk. I found it reassuring to recount their names again …Oh, and me. Whoever I was.

‘Isn’t it,’ Yorrick grinned, in the same echo of a voice that was once his. Because there was something strange about all this, even with the group tittering away just as they would any other day. And as I looked down, then up, down-

A gasp escaped from within. Because down there… There were two. Two of each friend. The ones above, the ones talking to each other, were no more than a wisp of smoke with some inner spark bringing them to life. But below… Below was where the bodies slumped, limp and just about lifeless.

They weren’t dead, I could feel that much in the core of my being. There was still a ring of energy coursing through every one of us, kept alive by the circuit of hands we kept intact. Thankfully, one that wasn’t going to be broken any time soon. Our bodies were still. The muscles locked. Yet when I looked above, I couldn’t help notice how happy they looked. How liberated. Bewildered, I turned to where Natasha’s essence floated above the ground, that smirk on her features so very, very familiar.

Erinn. So that was who I was. It felt about right, but not quite. Something was still missing…

‘It’s just… so light.’ There it was. The voice that belonged to me. I wasn’t talking -I was thinking. All it took was for an idea to form, and then -boom! -out it would come for all to hear. For better or for worse.

There was more to the feeling than what I could actually explain. It was more than just light, there was also some form of relief. Like the weight had been there before, but shifted. Lifted. Bodiless.
Yes, we were bodiless. But if that was the case, then where was…?

I’d seen all of the others and the empty shells they’d left behind, but when it came to the part where I acknowledge my own absence… That was where I slipped up. Down there, leaning on the cushions, was my own shell. So peaceful, I may as well have been asleep. Queasiness began to rise…

‘Weird, innit?’ Kitty must have noticed my expression, because it didn’t take long for her to waft over towards me.

Manu’s cool laugh rang out. ‘It takes some getting used to. But don’t worry, I’ve no doubt you will.’

‘Of course she will,’ said Yorrick, weaving around the expanse of the room. ‘It’s only floating around.’

Why didn’t I? It sounded like a challenge, and I was eager to accept. After all, was it not fear holding me back most of all? However much I enjoyed being in this disembodied state, the possibility of losing it altogether, wasn’t one I wanted to come to terms with just yet.

As if guessing my problem, Kitty leaned in closer and said, ‘Chill out, it ain’t going anywhere. What do you think the grounding was for?’

Those were Natasha’s last words to me, before we blacked out. ‘To keep you from getting lost out there,‘ she said.

I reverted my gaze to the still fresh bodies, connected in that life-giving circle of energy.

‘Wherever we go, we go together,’ Kitty went on, her face more serious than I’d ever seen it. ‘So even if, ‘eaven forbid, summit did happen out there, at least we’d all be gone together. But don’t-cha worry. We done this more times than Nishe’s given you a hot dinner, so you can trust we know exactly what we’re doin’.’

Something about the way she said it set my mind much more at ease, and I couldn’t help catching the excitement from the spirits around me.

‘That’s right,’ Reuben said. ‘We all keep each other grounded so that when it is time to come back, there’s someone there to snap us back to reality.’

‘And today, dat someone is me,’ Kitty said proudly, indicating the tazers and empty vial laying by her side.

So that’s what that meant. Interesting.

‘Where will you be taking us this time?’ Baird looked up inquisitively, to which she waved a smoky hand. ‘Ah, here and there. Wherever I think of.’

My friends tittered on a while longer, no doubt enjoying the way their forms slid about and overlapped with each other. I was still getting over the surreality of the situation. One moment, we were down there, hands linked, me with little to no clue on what was about to happen. The next… this. It was unlike any other experience. Any. So it didn’t make sense that it felt so… familiar. So right. Like deja-vu from another lifetime. Could things like that even happen?

I then remembered the questions that had been haunting me, that we’d come here to sort out, and became very frustrated. Where was all this leading? Were they going to show me the past I so desperately wanted?

Well, it was probably about time. We got our acts together, and Kitty led the way. Scooping up her powers, she pulled on the connection that tied us together. With that, we broke out. Out, through the walls, away from this room, this depot, from all our bodies slumbering peacefully on the floor cushions. Out, we burst into the atmosphere, gusts of air hitting us cleanly through the gut. Or rather, where our guts should have been. We followed with no hold ups or further issues.

The connection was strong; I literally felt its pull on me. Urging us to keep close, stick together. As my mates had already pointed out, this bond kept us safe, prevented us from losing ourselves in this strange, alien world. I accepted it, let Kitty lead us wherever she would, whilst I relaxed and enjoyed the ride. Outside was more vivid and beautiful than ever before. We floated above the depot, the travellers who lived there, so unaware of who floated in the very air above their heads. Higher and higher still. The landscape opened itself out to us, the fields and forests and lakes and hills. So much more than we’d ever see, confined to the smallness of our bodies and rooted to the ground. The people at Madness shrank, once an overwhelming mass, now pretty much nothing compared to the vastness beyond.

For the first time since I could remember, I opened my heart to experience something new, without worry, without judgment. I just took what came. Hopefully it would give me those longed-for answers at last. I spread out, let my spirit body take up as much space as it wanted… and began the guided tour. 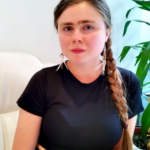 Nika Murray is a creative person who has always enjoyed writing, drawing and dance. She used to fill notebooks with stories and ideas. It wasn’t until the age of fifteen, that she began working on her first serious novel, ‘Randouka’.