what a wicked, wicked world,
where men turn against each other,
cut off the hand of their brother
to steal from their mouth—their bread.

what a wicked, wicked world
to let helpless children die,
to steal from a mother’s eyes
the greatest pain they can cry.

what a wicked, wicked world
what a pit of pure injustice,
when those who have no fault at all
fail to be shielded by justness.

what a grisly, ghastly world
what a depressing story,
when a man’s grandness and glory,
makes his presence predatory.

what a wicked, wicked world
what a disappointing truth,
the disillusioning gift—
we hand over to our youth.

what a wicked, wicked world
drowning in hatred and evil,
what a confusing paradox
to make love right but illegal.

what a beautiful, beautiful world
yet, we bruise her every day,
building towers on her skin
and making her children our prey.

what a beautiful creation
the children born from her soil!
the oceans from nation to nation
that we have ungratefully spoiled,
so she weeps, sadness and anger
and when her tears start to boil
her wrath awakens turmoil,
as her body is dismembered,
she—the one who birthed
mountains and waterfalls,
begs for her children’s mercy
but they have ignored her calls.

so one day she’ll take it all,
and leave only traces behind,
of the children she thought blind
those who called themselves
—mankind. 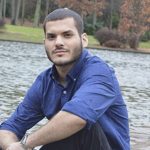 Lázaro Gutiérrez is a Cuban-American poet. His family immigrated to the United States when he was eight years old in search of a better life. Lázaro became fascinated with writing at an early age and was able to explore his passion for stories and poetry while completing his studies in college. Lázaro has published various poems and has been featured in multiple anthologies including Agora!, Z-Publishing House, The Literary Yard, WinglessDreamer, Of Earth & Sky, You Might Need To Hear This, and Poet’s Choice. He is completing his debut poetry collection.