The Girl Who Was Too Much

It’s funny, she thought. As a kid she kept so much bubbling under the surface. She knew that now, reflecting on all the stress-induced ailments she endured. From psoriasis, to shingles, anxiety, burst blood vessels and stomach ulcers. It was humourous that slow boil she once poorly managed would eventually erupt, pouring from her and soaking everything in it’s path. She was like that storm you wait for after a drought. Intense, but refreshing and liberating.

She looked down at her tarot cards and a futile feeling washed over her. Nothing could ease the discomfort she was feeling. She had 3 sleepless nights, and 4 days malnourished with pulverising anxiety, over an incident that didn’t deserve this much attention. Here she was, yet again.

He said she was too much, and well, he wasn’t wrong. When it was revealed that he had slept with another woman only hours after she left his bedroom, she was too intoxicated to control her emotions. She cried uncontrollably and began victimizing herself and summarizing her past toxic relationships like girls who are too much and way too drunk, do. It was a hit to the ego that he was left so unsatisfied with her that he needed to seek out the company of another. It was a recipe for too much, really.

The next morning, she was soaked in humiliation and shame. Not because she had feelings for this person, since inevitably she just would, but because she revealed a vulnerable part of herself that was clouded. The memory of the night was distant and unreachable. She tried to focus on the fact he had slept with someone else to diminish her feelings of embarrassment but that just triggered her feelings of unworthiness.

It was a test for the work she had done and she’d failed. She was grieving over the person she thought she’d become, a person strong enough and smart enough not to get tied up in situations like these. She was angry that her emotions were the focus of that evening and nothing else, but at the end of the day it didn’t matter.

What should matter to her is that she had lost sight of herself and her commitment once again. It was painful to hear she was too much, but she thought it was true. This had been used against her before. People who didn’t see the beauty after a storm. She was too much because she felt too much, and it was a deep part of herself she tried so hard to love. It is what set her apart.

As her eyes drifted from her tarot deck to her cat Alice laid sprawled on the floor, washing her face she thought:

It was okay to be too much, probably better to be this way than not enough, and she knew she was enough. 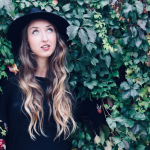 Featured Image by Oksana on Unsplash