The fire crackled in the hearth, filling the room with the earthy fragrance of woodsmoke. Its flickering flames bathed the room in a golden glow. I lay at the foot of Robby’s bed with my chin resting on his blankets and my eyes closed to savour the warmth.

Robby shut his book with a gentle thud and placed it on the bedside table. He ruffled my fur, scratched a spot behind my ears and offered me his salty fingers to lick. He pulled away to cough, spluttering and wheezing into his fist. The fit lasted several moments.

I lifted my head to watch him dab at his mouth with a grimy purple handkerchief. He shivered, despite the heat from the fire. Beads of perspiration glinted on his brow, plastering grey tufts of hair to his head.

His trembling hands lifted a beaker of water, splashing most of the contents across the bed sheets. Usually clean-shaven cheeks betrayed white specks, sparkly to look at and scratchy to lick.

‘Good boy, Judas,’ he rasped, setting the half-empty beaker back on the bedside table and giving me another pat on the head.

I wagged my tail at the sound of my name.

He nudged me away so he could shift onto his side. The bedframe creaked and wobbled, the mattress groaned, then the bedcovers were lifted and Robby welcomed me to lie beside him.

‘Now, I won’t be doing this every night,’ he warned me shakily, ‘but you’re a good boy and I’m cold.’

I snuggled into his arms, thudding my tail against the bedcovers.

‘It will be nice to have company tonight.’

He puffed out the reading candle and settled his head on the pillow. His eyes fluttered closed. I breathed in his pungent human odor with its faint whiff of Castile soap. His chest rose and fell to the tune of rasping inhales and rattling exhales. My tail stilled, and together we drifted off to sleep.

Something was wrong. I knew it even before I opened my eyes. The air had changed.

I hopped up onto all fours, tail tucked and back arched. A pile of ashes settled where the fire had burned. Without its crackle, there was utter silence. Robby’s hand lay limp at his side. He didn’t reassure me, ‘Good boy, Judas.’ His chest was still. The room seemed to hold its breath.

I nudged his gnarled, age-spotted hand with my nose. Not only was it ice cold, but stiff and an unusual shade of blue, not caused by his normal protruding veins. Nudging it again, I whimpered. I yelped and whined. My head fell back and I howled, cursing the air with my anguish.

Robby was stolen away. I soon followed. It was two years until we were reunited, newly immortalised in stone.

In the south choir aisle of Chichester Cathedral, I lie at his feet. Together we are cold and unmoving. Youngsters run their sticky palms along my back. Adults touch their warm noses to Robby’s and mutter desperate prayers. Strangers drop pennies in the donation box with a chink to light little candles in his honour. Guides in bright vests announce, ‘Bishop Robert Stratford,’ even though that’s not his name. He’s Robby. My Robby.

We crumble and collapse from love, time and wear. Conservation specialists heal us with gentle hands and plaster, only for the deterioration to begin again.

Things feel different now than they did when Robby was awake. He doesn’t instinctively reach out to ruffle my fur or scratch behind my ears anymore. He doesn’t let me run outside so I can bark at pigeons. He doesn’t read or smile or even cough.

I wish he would get up and play, but he lies there and I lie at his feet.

The fire with its warm flames, crackling and dancing will not be forgotten. 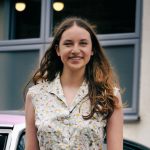 Featured Image by Mvegas from Pexels