I was writing English language flashcards once when I came across a quote about adolescent language. As an adolescent myself, this quote struck me in particular.

“Why can’t we change the world?”

The article from which the quote comes was written by a linguist named Penelope Eckert. A lot of her article talks about the way in which adolescents are viewed and tries to explain why we have language differences to other age groups. Adolescents are not viewed fairly overall, she reasons. We are constantly criticised for everything we do.

“Young people are too addicted to their phones!” someone posts to Facebook, their tenth post of the day.

“When I was younger, I’d be outside all the time until it was dark!” they say, referencing a time with lower crime rate and less cars on the road, making it safer for them to be outside.

“Teenagers these days are lazy!” they tell us while we are swamped with homework, trying our hardest to maintain a good social life too so we don’t become isolated. We are exhausted but are judged for wanting to unwind.

Every generation views the generation that follows after them with some level of disdain. There are barriers and differences and everyone knows it. From senses of humour, to fashion preferences and slang, there are inherent differences that separate us from those who came before us and those who come after. The fear of the unknown fuels this disdain, as we tend to dislike the things we don’t understand. If I wasn’t a part of Generation Z, then the memes would certainly fly over my head, and I’d be concerned for the young people of today. I don’t think, however, that this is reason enough for us to not be allowed to change the world.

Those who are from the older generations may argue that they have to go to work everyday. They get paid to do their daily work, and for many, the work stops when they come home. When we come home from school, however, we have hours of homework on top of the work we have done all day. We are pitted against each other, often seen by schools as just a grade on paper. Another success or failure for the school’s yearly reports.

Additionally, the inescapable presence of social media drains our social and emotional energy. The expectations of looking a certain way, people valuing themselves based on the number of likes they’re given on a post, the uncontrollable need for approval. Young people are taught unhealthy habits and unrealistic bodies by some of their favourite “icons.” The BeReal Campaign researched and found that 67% of 11-16 year olds regularly worry about how they look. The constant body image issues that social media inflames is often what leads to 75% of mental health problems being established by the age of 24 (according to the BBC). The stigma around mental healthcare prevents adolescents from breaking through towards their truest potential, fearing the disapproval of the adults in their life.

According to Eckert, when young people are “unable to make their mark in the world of adults, they must make a world in which they can make a mark.” That’s where this idea comes from that young people can’t change the world. We seek the approval of our elders and are often shut down, so we try to make a mark in our own way, which often goes against tradition. It creates the impression that we can’t change the world but only a smaller bubble of just adolescents.

And yet, we’ve managed to defy all the odds. During the Black Lives Matter Movement, many young people protested and used their online presence to educate others on the injustice in the world and show how they wanted to move towards a more equal society. The technology which we are accused of being addicted to has been used as a tool of massive change. We digitally created and signed petitions, donated to charities and organisations, fought for equality in all the ways that we could. We still are today.

Decades ago, people during the Civil Rights Movement were told that they’d never make a difference. Yet, look at how far we’ve progressed because of their determination and desire to make a change in the world. The older generations at the time were scared to see change from the tradition that they were comfortable with. But were there older people campaigning back then? Of course! There is often less of a disconnect than we think, but for many it is still black and white.

There will soon come the time in which the baton is passed to us and we will be in charge. Terrifying, I know. The generation that makes memes about eating cleaning products and being too scared to call the doctor’s office is the same generation that will stand up in protest to make sure the world hears what is right. We are complicated, as are all young people trying to find their own identity and way in the world.

And thanks to criticism from adults, we’re known as the “snowflake generation.” We are frequently told that we are too sensitive because we don’t like old comedy reliant on inherent misogyny and racism. If I am a “snowflake” for refusing to laugh at that which mocks the marginalized, then I’ll gladly be one.

The irony of being labelled a “snowflake” is also amusing. We create memes of calling entitled people “Karen” and suddenly there’s uproar from people about how it’s offensive. Some have even gone as far as to say it’s as bad as the N word. A simple nickname for people being entitled and rude is not the same as a racial slur that has had derogatory connotations for decades. I don’t think adolescents are always the ones who are too sensitive.

Despite all that works against us, we’ve already started making changes in the world. Children are welcomed to a more accepting society in which they are not confined to binary gender presentations. They can love who they want, and we aren’t going to stop them. Because of the presence young people have created, people can come out and be educated on LGBTQ+ rights and have support resources when families are unaccepting. We are seeing more representation in the media of characters that are of colour and/or are LGBTQ+, giving more people someone they can relate to.

We know that we will never be able to make total change in the world when we are disapproved of by adults, but that won’t stop us. Many of us have become activists for the issues that we care about. From climate activists, to human rights activists, we are doing everything we can.

No single person can change the world. But together, we are the future leaders that are heading towards a more progressive society. Someday, it will be less, “Adolescents aren’t allowed to change the world,” and more, “How can we empower and collaborate with young people to help them to change the world for the better?”

Whether society tries to put us down or not, young people of today are determined to make an impact. Whether that’s helping one person or many, adolescents will change the world and no one and nothing will be able to stop that.

“Adolescents aren’t allowed to change the world.” Watch us. We won’t go down without a fight. 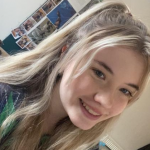 Chloe Taylor is a 2nd Year English literature and linguistics student at the University of York, England. She is 19 years old and uses writing as an emotional and creative outlet, often writing about grief and other worldly problems. She is a competitive Ballroom and Latin dancer, competing for her university team with a passion for reading in her spare time.