The Rest of My Stories

Picture it: I’m going through puberty. I’m a tiny little teenager with braces and the frizziest hair you’ve ever seen. And I’m utterly obsessed with lighthouses.

So my family took a trip to Hilton Head Island, where there was a lighthouse that I’d recently discovered hidden on a golf course. It was old and no longer active, used as a lookout tower during the World Wars. Of course, there was a ghost story that I was fascinated with, accompanied by rumors that a girl in a blue dress haunts the island.

We walked up to the structure––this skeletal lighthouse standing stately and towering over the oaks. I was stunned. Star-struck.

I’ve visited some other lighthouses in the state, but did I get a picture in front of each one to prove I was there? No.

I visited the lighthouse on Hunting Island last year, and I remember that moment being too windy to enjoy myself while my back was getting burned from the sun.

(I’ll keep you updated on the lighthouse I might have to sneak through the woods to see. It’s apparently on private land. Oh, well. . . )

What have I to say in my defense of this strange obsession?

Well, seeing all of South Carolina’s lighthouses was my very first bucket list item. I found the poetry in these abandoned things that used to draw ships into the harbor. I liked that they, rather than houses, survived over a century of hurricanes. There was a certain romance in lighting a lantern that would be spotted through the dark place on a ship in the ocean, and a man following it all the way to safety. More than any of that, though––at my grandpa’s funeral when I was ten years old, a friend of our family sang a song called “The Lighthouse.”

Turns out, that’s what got the ball rolling. I memorized the song, loved the message, and realized how overlooked lighthouses really are. Listen, I’m not much of a history person, but the history of beacons, especially ones I lived only hours away from, really sucked me into their stories.

My message is this: We’re all lighthouses, kind of. Aren’t we all survivors of our own storms? Someone always runs to you for safety, whether it’s a child, a spouse, or a friend. We have a history. We’re all different ages and have different stories and stripes. (I’m not calling you old, abandoned, or haunted, by the way.)

Let me get to the point, because my message is actually this: BE a lighthouse. Help. Guide. And be someone’s light they need in their dark ocean. In the end, it’ll be a story worth traveling to hear. 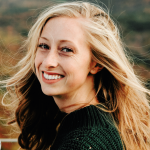