The Painful Imprisonment of Being a Girl

Being a girl is almost as beautiful as it is tragic. The second that you hit age 5, you start dreaming. You dream of being a ballerina or an astronaut, maybe even a cowgirl. As time goes on, people tell you that you can do anything you want. They say you can be anything you want.

Being a girl makes people think that you cannot do things. Not because you don’t have the ability, but because you’re a girl. When the teacher calls on someone to help put the chairs away, they don’t think to ask the girls for help. Why? It’s because boys are presumed to be the ‘strongest.’ Even if you’re ten times stronger than the boys or “men”, they still have a picture painted in their heads of you being weak. When girls have a mood change, the boys start asking: “Is it that time of the month?” Heaven forbid that you appear to be in a different mood than what they’re used to. Your parents will continue to try their best to protect you from the cruelty of the world, but can you truly play the role of Rapunzel your entire life? Although, when we were young, we used to watch princess movies and dream of the perfect wedding, living as a princess, and having our dream prince. Our fantasies did not last forever since they were never meant to be lived. They were created to help us dream.

As you get older, the world goes on. It doesn’t get easier, but it goes on. It goes on when you feel pain, sorrow, and even grief. One day you wake up and- bam!- You’re ten years old. Girls start crushing on boys and getting boyfriends. Boys start creating images of girls and saying things like, “She’s too ugly” or “No, she’s just fat.” You are defined by whatever they say.

I’m not sure when everything starts. When do your parents start telling you that your skirt or dress is too short because they don’t want boys to “get the wrong idea”? When is the dress code strictly enforced so that you don’t wear anything “too revealing”?

One day, when you wake up like you usually do, you’ll be turning 14. Your mom will start to get emotional, “My baby’s growing up so fast!” Then you’ll have a phone and social media apps. People will start to say mean things about you online or make up rumors that are far from the truth, and you’ll get called more brusque names. Soon, you will notice how boys act out and you will wonder why you ever wanted a boyfriend. What happened to the princes you saw in movies growing up? Those men were written to make us have expectations, and the men in front of us were real. That is why we were slightly disappointed: our expectations were different from our reality. We did not realize that these boys were nothing like the princes that we fantasized and dreamed of marrying when we were children. Years ago, we were not aware of how different our dreams and our realities were. Maybe that was because that was also the time in our lives when we were the most gullible.

Growing up with people saying you cannot do things “because I said so” or “maybe when you’re older” can cause you to change. You might sneak out or start dressing differently because you’ve been trapped for too long. After you’re finally free from being imprisoned, that’s when the comments from people start blowing in like wind in a blitzing storm, “I miss when you were a baby, what happened?” That’s a good question, what happened to you? What happened to me? Everything happened, but at the same time nothing did, and that’s the problem.

People have a bad habit of forgetting that there is so much more to women than their appearances or their bodies. Women are smart, they have dreams, and ideas, as well as greatness. So, why should a woman be treated any differently than a man? Why should they have to cover up their shoulders as children while they are in school? With everything being out in the open, all said on paper, how do you stop feeling imprisoned as a girl, as a woman? Is there even a real way of finding out? In other words, is there a way to cry for help without crying? 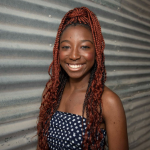 Reece Wright is a High School student from Fort Worth, Texas. She enjoys writing about topics that have power and purpose and can leave an impact on people. Reece began pursuing theater and took an interest in writing while attending Fort Worth Academy of Fine Arts. She hopes that her literary contributions will inspire youth and young adults to open their minds to limitless possibilities.