The Gown of Guinevere

There she stood before the king and all his court, her feet cold beneath the skirts of her stolen dress. Eleanor didn’t belong here. She knew that and yet for some reason she’d allowed the King’s knights to escort her into the castle.

‘My Lady,’ they called her with flourishing bows. They acted as though they knew who she was, but that was impossible. She was the only daughter of a struggling blacksmith. Her cheeks were smeared with soot, her fingernails were dirty and her black curls a tangled braid down her back. Even wearing the red satin gown she found in the forest, she looked out of place in King Arthur’s court. Eleanor was not a Lady.

When the bright scarlet satin caught her eye, a startling shade against a fallen tree trunk in the green forest landscape, she found herself compelled to try it on. There was no one around to see her, no one to claim it and no clue as to who it belonged to.

She stroked the material longingly with her grimy fingers and heard it calling. ‘Guinevere,’ it seemed to sing through her mind. ‘Guinevere.’ The more she listened, the more it sounded like, ‘Eleanor.’

The puff sleeves, the slim corset, the layers upon layers of skirts were finer than anything she’d ever seen before. When she held it against her body, a tingling that begun at the nip of her neck and consumed her chest promised her it was hers.

I’ll just try it on, she thought. Then I’ll return it immediately and no one will ever know.

She wanted more than anything to take it home, but she knew her father wouldn’t approve. He was as honest a man as there ever was. Stealing, he’d call it.

It’s not stealing if I give it straight back, she retorted internally and made her decision.

The gown should have been difficult to put on. Most were, that’s why princesses had maids. This dress, however, attached itself to her body like a magnet. Eleanor tugged the ribbons clumsily and they fastened into perfect place. She tied them in a messy knot and with another tug created a beautiful, symmetrical bow.

In her stolen satin gown, she felt more herself and more at home than ever before. Eleanor spun around and the heavy skirts lifted with the air flow, weaving and waving like the wings of a butterfly. She lifted her arms and spun again and again!

So this is what freedom feels like, she thought with a huge grin.

‘My Lady,’ someone addressed her. A man seized her waist with a firm grip to stop her spinning and steady her dizziness. Lightheaded and full to the brim with exuberance, she barely noticed him guide her into a royal horse carriage filled with noble Knights. Their bows, their conversation, their escort was blurry and surreal like a dream until the moment she was face to face with the King.

King Arthur of Camelot had a favourable reputation. He was the fair haired, righteous knight who pulled Excalibur from the stone and retrieved the Holy Grail! The peasant girl, Eleanor, stood before his throne in her stolen dress unable to break eye contact. She was lost for words. He was the first to break their shared gaze but he didn’t divert his attentions. Instead he looked her up and down, inspecting her every inch carefully.

Everyone in the room stared and whispered amongst themselves but for a reason unknown to Eleanor, her hair and the soot didn’t seem to warrant raised eyebrows or frowns of disgust. They were smiling. She saw in their glinting eyes and dimples, hints of admiration and jealousy. They couldn’t have been looking at her, surely… but they were.

‘Guinevere,’ Arthur said softly and it startled her. He was standing now, holding out his hand for her to accept. The knights and the rest of the court were watching and holding their breath and as she seemed unable to speak, she could think of nothing to do but take it. He kissed the back of her grimy hand as though it was the most precious treasure in the world. She didn’t know who Guinevere was, nor how she, Eleanor the peasant girl, came to be mistaken for her, but who was she to refuse the attention of the King?

He gestured for her to join him on a velvet lined stool on his right and she did so, obediently. Once she had sat down, she caught the eye of a peculiar man in the court audience. He struck her as particularly peculiar because of the striking blueness of his cloak and tall wooden staff in his hand. This strange man stared pointedly in her direction with dark, narrowed eyes and the hint of a scowl. Eleanor knew right away he saw straight through her gown disguise to the poor peasant she really was.

Her shock had worn off. The tingling sensation had returned and for reasons unknown and unjustified, Eleanor knew in her heart she did belong here. So she smiled at him with dazzling charm and leaned towards to the King so she could better hear the secrets he whispered in her ear. 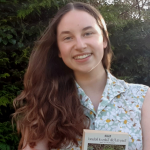