A Call To Madness

There are a limited number of things in this world that could be as gut wrenching as a betrayal. Specifically if said betrayal was enacted by your family. And they were out to kill you. But here I was, standing in the middle of that exact scenario, as I watched my life crumble before my eyes. My father, dead on the floor. My stepmother, running toward me with a fully armed guard. No exits.

I thought that waking up in the sick bay would be the weirdest part of my day.

I guess I was wrong. A rare occurrence.

I wasn’t sure if anyone realized that I was conscious. I could hear everything that was going on, I just refused to open my eyes, refused to acknowledge that the voice I overheard belonged to my dad.

“…have killed her. I’m not really sure why, or how it didn’t. I do know that things are going to have to change around here, and quickly.”

“What are you saying?” Another voice, belonging to Ms. Garcia, the head doctor, spoke up.

A pause, before my father spoke again, “Some dangers are best kept dead.”

My mind raced, the conversation fading into the background, trying to decipher the code, the meaning behind it all. Surely they weren’t referring to me.

There wasn’t any reason I should be in the hospital, at least, none that I remember. And yet, maybe I was forgetting. It was as if my brain had cut everything out regarding last night, besides the fact that I had snuck into my father’s lab before bed, to say goodnight, and then…

My curiosity got the better of me as I opened my eyes the tiniest bit.

I stifled a cry, my eyes growing wide. My hands were covered in layers upon layers of gauze, though I couldn’t feel any pain, couldn’t see any blood. But I saw something else. A thin distortion in the air around them, almost as if you looked through the heat above the flame. The heart monitor next to me increased its beeping, blowing my cover, and failing to hide the growing panic inside me.

Dad was the first to notice, as he looked first at the monitor, then at my hands, then at me. There was no element of shock with him though; it was as if he was waiting for me to uncover something he had found long ago. But the look he gave me, a silent message; Run.

“Ah, good, you’re awake.” Said Ms. Garcia, completely ignoring the grave exchanged passed in front of her eyes as she quickly disconnected me from various machines, removed an IV, an oblivious optimism quickly engulfing her face like a mask. “I think you should be all set to leave now, but your father has asked me to escort you to your room-”

I swung my legs over my bed, knocking her aside, as I ran out of the room, down the halls, still in a thin paper gown. A loud siren blasted through the wing, through the whole building as far as I could tell, shocked faces peering out of rooms at the strange sight.

Suddenly, I could hear loud footsteps pounding the ground behind me. The guard. Really, Dad? I thought you were on my side! I quickened my pace, sliding around corners, forcing nurses and medical carts out of the way. “WARNING. DANGEROUS INDIVIDUAL RUNNING FOR THE SOUTHERN EXIT.” Dangerous individual? Seriously?

I had to rethink my escape plan, go somewhere that no one could follow me. The lab. I ran for the elevator, the fastest way to get to the bottom floor, but I couldn’t press the button with my bandaged hands, the footsteps coming closer. “Dammit!” I yelled, running for the stairs, taking them two at a time as I struggled to free my hands. Shouting echoed through the stairwell above me as I neared my father’s lab, growing louder, accompanying the pounding footsteps so close I could feel them.

Finally, I swung around the last corner, running for the lab, seeing the door, hearing yells behind me-

I froze and time stopped. A blackness crusted the walls, like residue after an explosion. Everything on the floor swam in a smoky haze, a pungent smell of chemicals burning my nose.

“You did this, you know.” I spun around, gazing at the cluster of pistols facing me, trapping me, my stepmother leading the pack, my father close behind. “Years of work, ruined.” Her face twisted in a smirk, her cold eyes focused on me as I felt myself shaking.

A quiet sob escaped from my mouth as I struggled to find air. “W-what? I don’t under…. How-”

“There was an accident.” My father stepped out from the crowd. I stared at him, trying to keep my face still, but so many questions ran through my mind it was almost impossible. “An experiment gone wrong. You happened to walk in at the wrong time, and-” His gaze shifted to my hands.

He didn’t need to elaborate. I slowly looked down, and gasped. The aura from earlier still moved like an invisible boundary, but engulfed by a light sourced at my palms. I shakily brought them to my eyes, rotating them as if to see that they were normal on the other side, to no luck. The light was everywhere.

A click brought me back to reality, though I immediately regretted it; my father held a gun, pointed at me, a tear streaming down his face. “I love you so much.” Slowly, he laid his finger on the trigger. Petrified, I shut my eyes, wishing this could all be over, bracing for the inevitable-

I opened my eyes, as my father slumped to the floor. Emotion blurred my vision, but not before I saw my stepmother, pistol in hand, standing behind his body. It felt like a cold fist had squeezed my heart, as the world spun around me.

A blast shot out around me, as tears ran down my face. All of my anger and frustrations pushed everything away. Heads smashed against the wall. Glass shattered. Bodies were tossed like rag dolls. I fell to my knees and sobbed. He was gone. It was my fault.

I lifted my head, scouring the scene of disaster. A small guard remained, blocking my stepmother, but nothing could hide the shock on their faces as they glanced around in fright. I felt no sympathy, no remorse. Anger pumped through my veins, fuelling the power that radiated around me like a flame. I slowly approached the group, staring them down. “You did this. And you… you will pay.” I glanced at my hands, unsure of what they could do. But I didn’t care what dangers awaited my experimentation. In one swift motion, I snapped the neck of one of the guards, watching his body crumple to the ground. From ten feet away. Part of me wanted to be shocked, but the scene sparked something in me. I did it again; crack, and let out a laugh that didn’t belong to me, but felt completely at home in my throat. Their guns, their strength didn’t threaten me. I was unstoppable.

“You could be useful to us.” My stepmother, unfazed by her weakened defences, studied me. “There’s a reason I’m keeping you alive.”

“KEEPING ME ALIVE? That’s bullshit! You killed him. He loved you, he TRUSTED you!” I stepped closer. Probably a stupid move, but I didn’t care. “I’m not afraid of you,” I muttered, inches from her face. “But you should be afraid of me.”

I shoved my arms out in front of me, wiping out the rest of her guard, and sending her flying backwards, slamming her head against the elevator. Blood trickled down her head. I walked towards her, careful not to tread on the bodies spread around me, holding her head in my hand.

She glared up at me, eyes fierce, and slapped me across the face. “You’re an idiot, you know that?”

There was that laugh again. “And you’re a coward… see you in hell.”

Slowly, I watched as the life faded from her eyes.

I drew a stiff gasp and scrambled up.

What had I done?

These people, all dead, because of me. My emotions had controlled me, pushed me to malevolence. I ran outside as fast as I could, staring at the lifeless building I had once called home. Sticking my hands out in front of me, I took a deep breath and concentrated, until I heard the sirens. Orange flames flicked from my bloody hands to the structure, quickly overtaking the building, and I knew I needed to run. Into the woods. A new state, a new life, anywhere. I just needed to hide. Run from my mistakes. Put it behind me.

And never looked back. 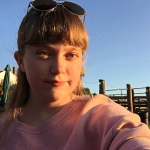 Isabel Coviello is a student who has dreamed of writing professionally. She also enjoys reading, baking, and performing for her family